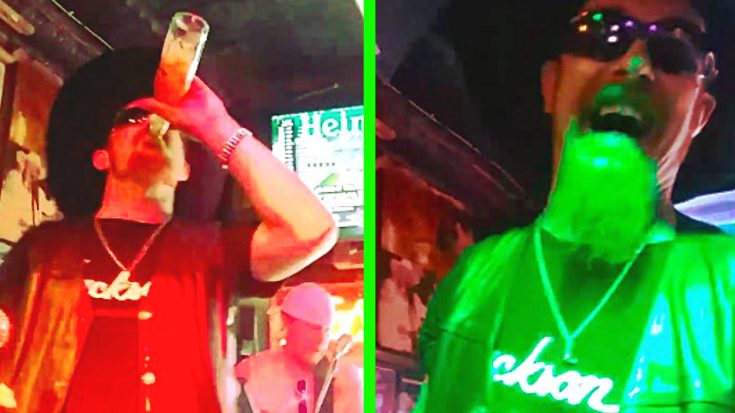 Waylon Jennings passed far more than his genes on to his family. He also passed along his passion for music.

His son, Shooter, has followed in his father’s legendary footsteps as an outlaw country singer.

But while Shooter is often branded as an outlaw like his father, his music also has a bit of a rock and roll vibe.

Shooter isn’t the only Jennings family member that is carrying on Waylon’s musical legacy. His grandson, Whey, is also a singer, and he sounds so much like his grandpa.

The son of Waylon’s son Terry, Whey is just a year younger than his uncle Shooter. The two boys grew up together, both constantly surrounded by Waylon’s talent.

Now that Waylon is gone, it’s up to his descendants to keep his legacy alive.

Whey and Shooter Jennings allll up in the same house !!! Too cool ! WOW , what talent!!! Get to NASHVILLE Palace!

That’s something that they’ve never neglected, as they continue to perform his music today.

Whey made sure that Waylon’s presence was felt in the height of the recent CMA Fest activities in Nashville. While he wasn’t performing at an official CMA Fest event, his performance ended up being one of the most buzzed-about of the entire festival…and that’s because it was entirely unplanned.

Random Appearance Results In Something Epic

One day during CMA Fest, Whey happened to stroll into one of the most iconic venues in Nashville, Tootsie’s Orchid Lounge, which is right across the alley from the famed Ryman Auditorium. It seems that he had no intentions of singing that day, but rather, was just stopping by to pay a visit to the place.

However, someone in the crowd ended up recognizing him. One thing led to another, and before anyone knew it, Whey was thrust up on stage.

Wanting to treat the people to a good show, Whey decided to sing one of his granddaddy’s most iconic (and rowdy) songs. The song he chose was “Lonesome, On’ry and Mean,” which was the title track of Waylon’s 1973 album.

Talk About A Crowd-Pleaser

According to Tammy Long Carolus, who shared a video of Whey’s spontaneous performance, the crowd went wild once he stepped up on stage. You can hear that in the video of his performance, as the crowd couldn’t help but hoot and holler at multiple points.

We’re sure if you were there, you would have reacted in a similar way. Whey sounds and sings so much like Waylon, that watching him sing “Lonesome, On’ry and Mean” is as close as you can get to watching Waylon sing it himself.

If you weren’t one of the lucky few who got the chance to watch Whey’s epic Tootsie’s appearance, you still can. Just check out the video of his performance below!

We’ve got a feeling that no one in the crowd will ever forget that moment!