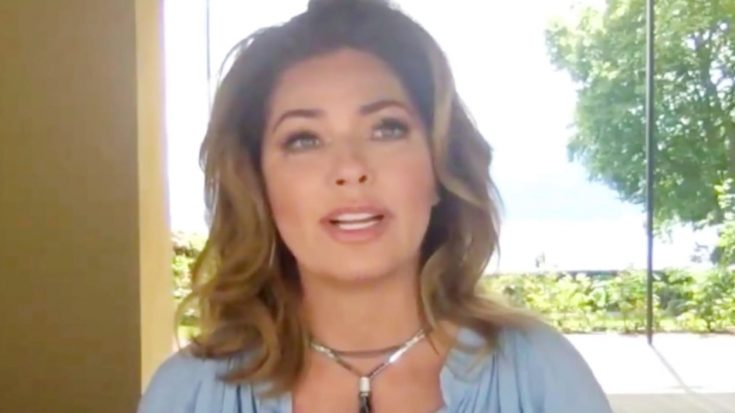 In 2002, Shania Twain released her fourth studio album, Up! The album went to #1 on the Country Albums chart and produced the hit singles “Forever and For Always,” “Up!,” and “I’m Gonna Getcha Good!”

The next year, Twain was bit by a tick while horseback riding in Norfolk, Virgina. Because of that tick bite, Up! could have been Twain’s final album.

Twain developed Lyme disease, which is a bacterial infection contracted through the bite of an infected tick. The disease affected her vocal chords, and she ended up losing her voice.

Since she couldn’t sing, Twain took a break from performing. She has spoken many times about how the disease nearly ended her career, and most recently opened up about its effects in a video interview with the hosts of Loose Women.

'There was a point where I thought I'd have to accept that I'd never be able to sing again.'

Shania Twain opens up about contracting Lyme disease and the stress this had on her voice and her singing career.

In her interview, Twain said she believed she’d never be able to resume her career. “There was a long time I thought I would never sing again,” she admitted.

Twain said “It took years” to figure out what was messing with her voice. “...and I would say probably a good seven years before a doctor was able to find out that it was nerve damage to my vocal cords directly caused by Lyme disease.”

The singer underwent multiple surgeries to repair the damage to her vocal chords. Thanks to those surgeries and a wealth of determination, Twain regained her voice and was able to perform again.

She kicked off a Vegas residency in 2012, went on tour in 2018, and in 2017 she finally released a new album after 15 years, Now. That album produced the lead single “Life’s About to Get Good,” which you can listen to below.

We’re so glad Twain recovered and is now able to sing again!