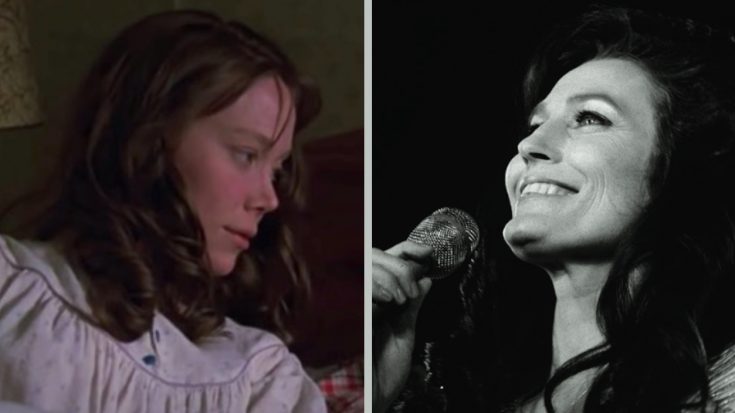 When Lynn released her autobiography in 1976, she fittingly named it after her signature song. That autobiography served as the main source of inspiration for the 1980 biopic about Lynn’s life.

Sissy Spacek played Lynn in the film, while her husband, Oliver “Doo” Lynn was portrayed by Tommy Lee Jones.

Spacek earned immense praise for her performance, especially since she performed all of her own vocals in the film. She ended up winning the Academy Award for Best Actress.

The movie itself was nominated for six awards, including Best Picture.

Spacek and Lynn remained incredibly close through the years. When Lynn was named CMT’s “Artist of a Lifetime” in 2018, Spacek was on hand to accept the award on her behalf since Lynn couldn’t be there.

During the ceremony, Spacek said:

“From the moment we met, she’s been my cheerleader, my sister, my best friend. And it’s still like that almost 40 years later. It’s my honor to accept her award. Well done, Loretta. Well done.”

Lynn passed away on Tuesday (October 4) at the age of 90. Her family released the following statement on her official social media pages:

“‘Our precious mom, Loretta Lynn, passed away peacefully this morning, October 4th, in her sleep at home at her beloved ranch in Hurricane Mills.’ The family of Loretta Lynn….The family has asked for privacy during this time, as they grieve. An announcement regarding a memorial will be forthcoming in a public announcement.”

The family has asked for privacy during this time, as they grieve. An announcement regarding a memorial will be forthcoming in a public announcement.https://t.co/KxcoIyiNW2

Spacek released an emotional statement to Deadline when she learned about Lynn’s passing.

“Today is a sad day. The world lost a magnificent human being. Loretta Lynn was a great artist, a strong and resilient country music pioneer and a precious friend. I am heartbroken. I send my deepest sympathies to her wonderful family, her friends, and her loyal fans.”

Hear Spacek talk about Lynn’s song “The Pill” in the video below to get an idea of just how much she admired her as an artist and person.

Our thoughts and prayers go out to Lynn’s family and all who loved her. She was the true definition of a legend.