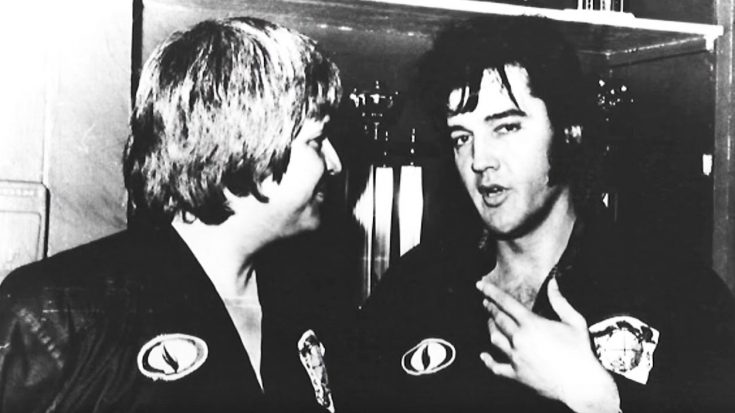 The year was 1958, and Elvis Presley was in the midst of his commercial breakout. But he only got a small taste of success before he was drafted into the U.S. Army.

Instead of using his fame to get out of the situation, Elvis proudly took off to serve his country. As a result, he garnered a great deal of respect from millions of Americans…and from one Japanese officer who would show up at “The King’s” front gate nearly two decades later.

During his time in the Army, Elvis began practicing karate. He developed a passion for the art, and continued to practice it throughout the remainder of his life. He famously included karate moves in some of his later shows, and had a designer craft jumpsuits for him that resembled karate gis.

Elvis’ devotion to karate also caught the attention of the Japanese officer who held him in such high regard for serving his country. Because of this, that Japanese officer one day decided to pay Elvis a visit, and he came with a gift in tow.

In special video segment called Gates of Graceland, Elvis’ former head of security, Dick Grob, recalled what happened on that strange and surreal evening. While he couldn’t remember the exact date it took place, he said it was at some point between late 1976 and early 1977.

Dick started his story by setting the scene, saying that Elvis was preparing to wind down for the evening and was upstairs in his famous Memphis home, Graceland.

“[Elvis] was getting ready to go to bed, he was in his pajamas,” Dick said. “And I got a call from Harold Lloyd who was on the gate…and Harold said, ‘There’s a guy down here in uniform who would like to see you.‘”

Dick got around to meet Harold at the gate, thinking that the officer he was talking about was a police officer, since Elvis’ security team used the police in every city they toured in. So you can imagine his surprise when he got to the gate and saw a man in a full Japanese military uniform.

The officer didn’t speak clear English, but he managed to convey a simple message to Dick. He told him that he had served in the Japanese military during World War II, and wanted to apologize to him and “Mr. Presley.”

“I’m really sorry about that,” the officer said.

Things Got Even More Interesting…

The officer also explained how much he respected Elvis for serving in the U.S. Army, and how he also appreciated his passion for karate. Because of all of this, he told Dick that he felt compelled to bring Elvis a special gift.

“He said, ‘I want to give this to Mr. Presley as a token of my appreciation,” Dick recalled. That “token” the officer brought to give to Elvis was a Japanese samurai sword. Dick said that the significance of his gift didn’t go unnoticed, since he realized the sword probably held great personal value to the officer.

Dick decided to go back to the house to see if Elvis would like to come down and meet the officer. Although he appreciated the gift, Elvis was already prepared for bed and didn’t want to go through the trouble of getting dressed up to come outside.

After speaking with Elvis, Dick returned to the officer and offered to give him a ride around the Graceland grounds. He showed him all of the highlights of the property before the officer departed, leaving the sword with Dick to give to Elvis later.

And The Strange Story Continues…

Dick was in the kitchen talking to one of the cooks when Elvis came downstairs to see if the officer had left. When he inquired about the sword, Dick pointed out that it was right there in the room. Without hesitation, Elvis pulled out the sword, and began swinging it around.

“He’s into the karate move with the sword,” Dick remembered. “And I said, ‘Elvis, you’re dangerous with that!‘”

After Dick threatened to shoot his gun if he didn’t put the sword down, Elvis disappeared into the living room and stashed it in there. “He walked in here, put it into a drawer…and that’s the last I ever saw of it,” Dick said.

Years later, Graceland’s Director of Archives, Angie Marchese, discovered the sword in the living room cabinet while she was doing a routine cataloging mission in the room. After years in hiding, the special sword finally resurfaced.

Angie opted to leave the sword in the place that Elvis stashed it decades before. After cataloging it, she put it back in its drawer, and that’s where you can still find it today.

We’re sure that samurai sword isn’t the only hidden secret looming inside of Graceland’s walls. Who knows what else someone may discover there one day…