Hank Williams Jr. Says He Remembers “Every Bit” Of 530-Foot Fall From Mountain 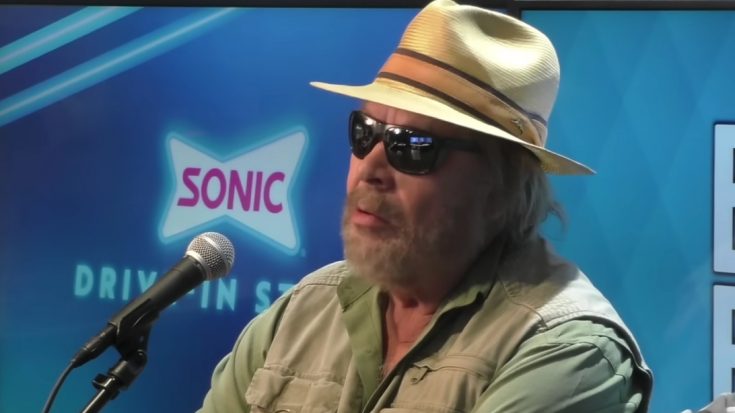 Hank Williams Jr. recently visited The Bobby Bones Show where he spoke briefly about the 530-foot fall from a Montana mountain that nearly took his life more than 45 years ago.

In 1975, Hank Jr. was mountain climbing with a friend in southwestern Montana when the singer slipped and fell more than 500 feet, striking jutting rocks on his way down. According to Dick Willey, the Montana rancher who was climbing Ajax Mountain with Williams, the pair was crossing a snow field when the singer fell.

“About the only thing he had left was the one eye,” Willey said of Williams’ injuries during an interview with 20/20 in 1987. “It literally tore his nose off…drove it up through his head, and blew a hole in his forehead…” Willey added that Williams’ jaw, teeth and gums were “pretty much ruined.”

A newspaper article that ran on the front page of The Tennessean a few days after the accident reported that it took first responders six hours to rescue Williams and fly him via helicopter to Missoula Community Hospital. After arriving at the hospital, the singer underwent 7 hours of surgery to repair the damage the fall had done.

Though decades have passed since the horrifying incident, Hank Jr. told Bobby Bones earlier this month that he remembers everything about that tragic day and the 17 surgeries that followed.

When asked by Bobby Bones what he remembers about that fall, Williams replied, “All of it…I remember every bit of it,” and added that they credit his survival with the fact that he didn’t black out.

“They strapped me to the outside of a helicopter…that ride was pretty rough,” Williams recalled. “Then you get down there and they cut everything off. I told them, ‘Don’t cut my cross [necklace] off.’ They cut everything off. I had a gun in a shoulder holster when I fell. They cut the holster off….Operated all night. I woke up a day and a half later, something like that.”

Bobby Bones then asked when Williams he could sing again. “It was a long time after that…it was starting all over.”

Hear Hank Williams Jr. talk to Bobby Bones about his fall from a mountain in the clip below.