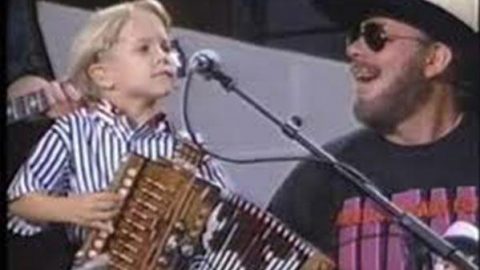 Many country fans have come to know the name Hunter Hayes. He is the youngest male country artist to ever top the Billboard Hot Country songs chart and has a thriving singing career.

Before he was burning up the charts, he joined country legend Hank Williams Jr. on stage for an insane performance of Hank Williams‘ classic, “Jambalaya (On the Bayou),” when he was just 4-years-old!

Williams asked the young musician what he would like to perform, to which he politely responds,“Um…I wanna do something called ‘Jambalaya.'”

Even at such a young age Hunter displayed signs of certain stardom in his performance. He played the accordion (which was almost half the size of him) at a level of professionalism that most artists can simply aspire to achieve.

Williams stepped back to allow Hayes to take the lead on the performance while occasionally jumping in at certain parts, making for a once-in-a-lifetime duet. Although Hayes is singing lead, we loved watching Williams watch a young country fan performing a true country song.

Watch Hunter Hayes make his debut on the big stage alongside the great Hank Williams Jr. in the video below!

Hank Williams Jr.’s ‘A Country Boy Can Survive’ Box Set is available on digital formats and in stores – it’s the perfect gift for the Bocephus fan in your life. Buy it here on Amazon!