George Strait Hardly Looks Like Himself In Epic Throwback Photo 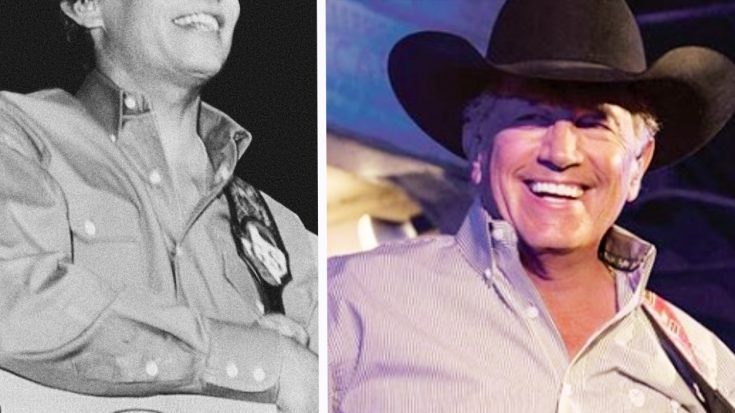 You Know What To Expect From George

George Strait is one of the most recognizable figures in country music, and has been for decades. Even if they can’t think of his name, people around the world know that they enjoy listening to the cowboy hat-wearing Texan with the bright smile.

It's always been about God and country music. The gift came from Him and country is the direction He chose for George. The new song 'God And Country Music' is a continuation of those blessings. Listen now. Link in bio. . #GeorgeStrait #KingGeorge #GodAndCountryMusic #CountryMusic #ACMawards #ClassicCountry #?

Over the course of his many years in the industry, Strait has always remained true to himself. He’s been called a champion of the traditional country sound, a sound that he’s reintroducing through his new album Honky Tonk Time Machine.

The album is a rich treasure trove of traditional country tunes, from the ode to police officers titled “Weight of the Badge” to the perfectly titled “God and Country Music.” The latter song features vocal contributions from Strait’s grandson, Harvey, who also joined his grandad to sing during his record-breaking RodeoHouston show.

The King Of Throwback Photos

Strait has been sporting his signature cowboy look for decades, with the exception of just a few times (that the public knows of, at least). So you can imagine how stunned fans were when he shared a throwback photo of himself wearing a suit and no hat.

Strait posted the photo in honor of Presidents Day, since it showed him interacting with President George H.W. Bush.

With Honky Tonk Time Machine being his 30th studio album, Strait has been celebrating his iconic career by sharing throwback photos such as the one above. He shared another that takes it back quite a few years…all the way to 1991!

That was the year that Strait released his 11th studio album, titled Chill of an Early Fall. The record was a smash success, and produced singles such as “You Know Me Better Than That” and “If I Know Me.”

Can You Recognize Him?

Strait was only 38 years old at the time, and is now 66. You would think he hasn’t changed too much appearance-wise since then, but you’re wrong.

The throwback photo Strait shared from 1991 shows the younger version of himself hardly looking like the man he is today. While Strait devotees can tell it’s him, it may be harder for casual country fans to recognize “The King of Country.”

Go ahead and check out the photo below and see what you think.

Here's a little #throwback from 1991 to celebrate the anniversary of the release of "Chill Of An Early Fall"! . . #KingGeorge #GeorgeStrait #CountryMusic #ClassicCountry #Throwback #TrueCountry #StraitCountry #?

He looks so young, doesn’t he?

Even though Strait’s appearance has changed over the years, one thing has remained the same…he makes good country music. The proof rests in his latest single, “Every Little Honky Tonk Bar,” which already reached a major milestone.

For six years, Strait was unable to land a single in the Country Airplay chart’s Top 30 spots. But “Every Little Honky Tonk Bar” debuted at the 20th spot on the chart following its release!

You can enjoy Strait’s honky-tonkin’ new single by tuning in to the audio below. We can always rely on him to maintain the country tradition in his songs!