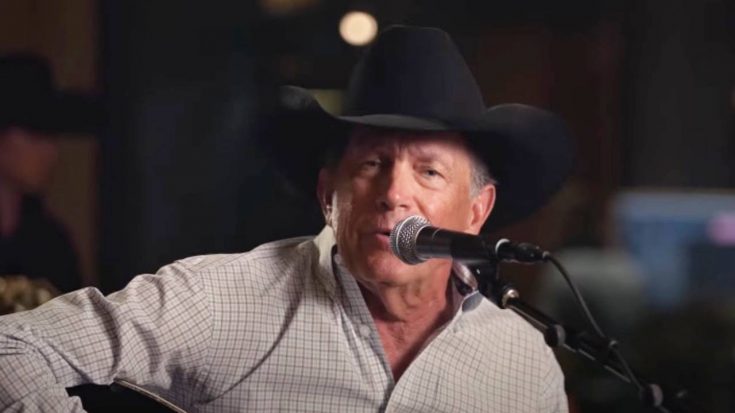 The last time George Strait picked up a guitar and sang for his fans was on February 1, 2020 at T-Mobile Arena. At this point, nobody knew that live music would be shut down the next month for over a year.

At that concert, Strait played his 30-song set filled with songs from his recent albums, his number one hits, as well as several covers.

Mid-March, live entertainment completely shut down in hopes that concerts could resume by the end of the summer. Strait even rescheduled a few dates to August 2020, which he ended up having to postpone again. Currently, his next concert on the books is on July 31, 2021 at US Bank Stadium in Minneapolis, Minnesota.

The next time The King Of Country performed for his fans was Sunday, March 21, 2021. He announced his performance on March 18 on his Facebook page.

“Join George and this ALL-STAR Texas lineup for ‘We’re Texas,’ a virtual revival where we can all come together to help Texas recover from the winter storm,” he wrote.

The all-star lineup he was referencing included other famous Texans Don Henley, Kelly Clarkson, and Miranda Lambert, just to name a few.

The event, where Strait performed his song “Troubadour,” was hosted by proud Texan Matthew McConaughey and his wife Camila. The actor introduced The King by saying he needed no introduction, but got one anyway!

Singing his 2008 single that earned him a Grammy nod, Strait sang the hit in a recording studio with three musicians backing him up on guitar.

If you enjoyed that performance, we’re sure you’d enjoy the entire show! You can watch the whole livestream event below.