George Jones & Wife Give Fans “The Grand Tour” Of His Bus 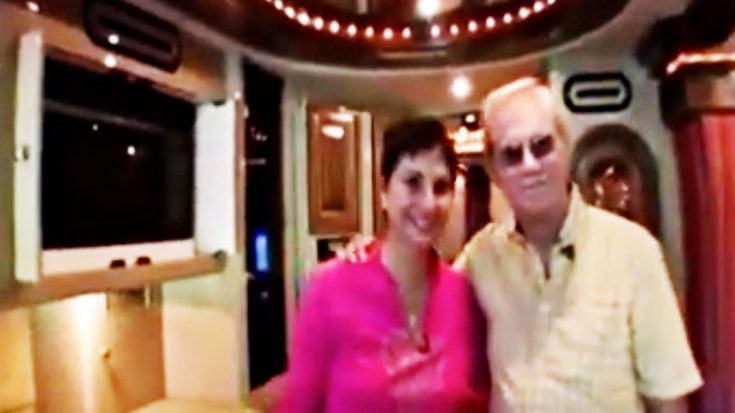 There’s nothing quite as luxurious as a country megastar’s tour bus and The Possum proves that nobody’s bus holds a candle to his with this full-fledged tour of his rockstar home on wheels!

In 2004, together with his wife Nancy, George Jones gave fans a complete walkthrough of his magnificent tour bus that is big enough to house an entire family. The red and gold road monster stands tall behind Jones who explains various aspects of the bus from his lawn chair set in the shade of an old oak tree.

Nancy pulls up in a small ATV alongside the bus and joins in the conversation as the two enter the bus’s front door and begin describing all the fantastic amenities that it provides.

Jones speaks highly of the massive television adorning the front of the bus, squarely placed in front of a comfy recliner that he says he spends most of his time in.

While Jones is in love with the television setup on the bus, his wife is rather pleased with the addition of a stackable washer and dryer unit. She then leads cameras to the rear of the bus where a hidden television slides up out of the wall at the foot of the bed. This is where she likes to take in her own shows while Jones is hogging the front TV.

For all the amazing features and lush elegance that George and Nancy Jones had installed in their huge tour bus, watch the video below!