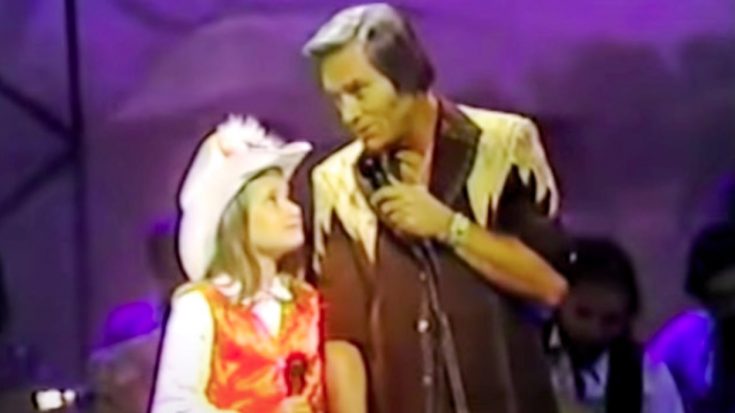 George passed away on April 26, 2013 at the age of 81. He left behind an extensive musical legacy, a legacy that now falls in the laps of his children.

Georgette is the most well-known of George’s four kids, being the only child he shared with Tammy Wynette. She is a singer as well, and has kept both of her parents’ legacies alive by frequently performing their songs and sharing their stories.

On top of that, Georgette often posts old photos of her parents, including more personal, “family” photos. So on the eight-year anniversary of George’s death, Georgette found some more old pictures to share with her followers.

The first picture she posted shows her being held on George’s lap while two of her older brothers stood around her. Georgette was just a baby at the time, and both she and her father had huge smiles on their faces.

On the next poriton of her slideshow, Georgette shared a four-photo collage. The different pictures showed her and George during various phases of their lives.

Georgette fondly remembered her father in her post’s caption, writing, “I really can’t believe he’s been gone for 8 years. I miss him and love him so much.”

You can see all of the photos Georgette shared by looking through her slideshow below.

Even though George is gone, he will be remembered as long as people keep sharing his songs. That’s exactly what Georgette does.

Tune in to the video below to watch Georgette sing “Choices,” which her father was famous for recording. She is teaching new generations of country fans about the power of George’s music.