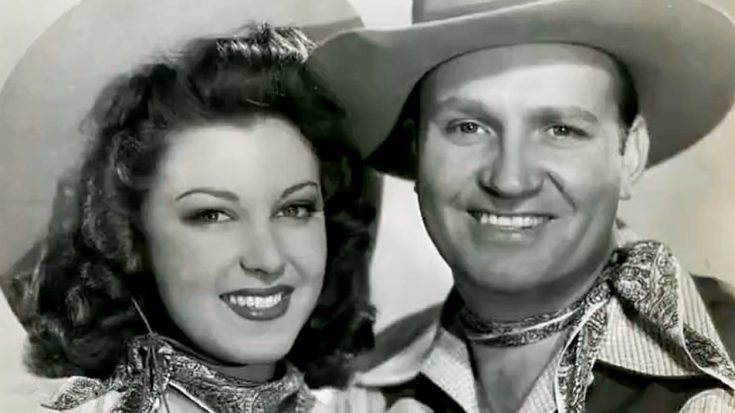 The woman by Gene Autry’s side for many of his hit movies has sadly passed away at the age of 101 – but her starring role in our hearts will last forever.

#1939 The Best Pop Culture Year Gene Autry, the singing cowboy, released what would become his theme song, Back in the Saddle Again…and appeared in eight movies pic.twitter.com/hP6mTCkEgs

Gene Autry – often called “The Singing Cowboy” – was a legendary singer, songwriter, actor, and skilled musician. Known for his unique singing and impressive acting chops, Autry appeared in more than 90 films in the span of six years back in the early 1950s.

Alongside him for unforgettable movies like Down Mexico Way, Heart Of The Rio Grande, and more was the ever-cheery Fay McKenzie.

R.I.P. Eunice Fay McKENZIE (1918-2019), better known professionally as Fay McKenzie, American actress and singer who starred in silent films as a child, and then sound films as an adult. Best known for her leading roles opposite Gene Autry in the early 1940s in five features. pic.twitter.com/vTG9r5PKrm

Born February 19th, 1918, McKenzie got her start as a child star and made her on-screen debut at just 10 years old in a silent picture. She came from a showbusiness family and acting was truly in her blood.

A Hollywood, California native, she spent much time growing up on movie sets and went to school with other famous fellow actors and actresses from the heyday of films.

At just 17, she moved to New York City to pursue Broadway and held some great roles there before returning to Hollywood and carrying some of the biggest roles of her career – alongside none other than Gene Autry himself.

This incredible film star and songstress was Autry’s leading lady for many of his great films with Republic Pictures back in the early 1940s. She appeared with him in Down Mexico Way, Sierra Sue, Home In Wyomin’, Heart Of The Rio Grande, and Cowboy Serenade.

“I got an enormous amount of fan mail so we were teamed from then on!” she told Western Clippings, reflecting on her time with Autry. “I loved working with Gene, he was terrific… He was also a brilliant businessman! Not a fly-by-night. It was a wonderful, rich experience. I would get to the studio early, about 5, go past the publicity department, and often someone would come out and get me to sign some piece of paper.”

“They shoved a release in my face,” she continued. “I never read the papers, as I was so protected by my family and never suspected anything could be wrong. One day Gene arrived at the same time I did and saw what was happening. He ragged me all day long! ‘You could have signed away your salary! That is the dumbest thing I’ve ever seen!’ And he was right! But, my theory has always been if you expect good, you’ll find it!”

McKenzie passed away peacefully in her sleep on April 16th, 2019 at the age of 101, but her death was not announced until just recently. She was a spry and chipper in her much later years and even made a cameo appearance last summer alongside her son Tom Waldman, Jr. in a film called Kill a Better Mousetrap due out in the future.

Watch this wonderful interview with Fay McKenzie during her 100th birthday celebration where she talks candidly about her time with Gene Autry.

Our thoughts and prayers are with her family during this very difficult time. Clearly, she was very well-loved and admired by millions.