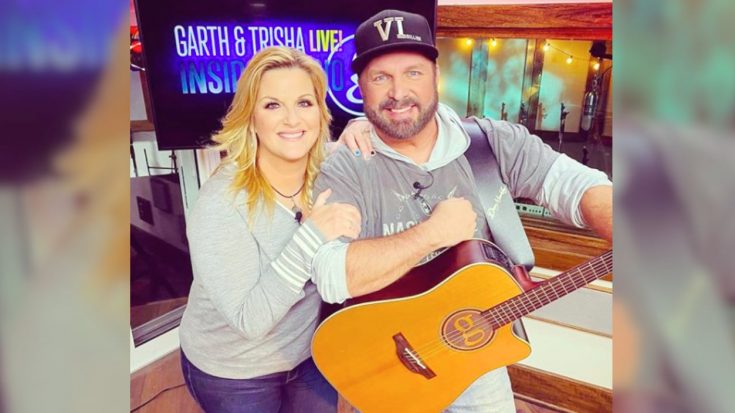 In March, Garth Brooks and Trisha Yearwood hosted a livestream concert on Facebook to entertain fans after during the COVID-19 pandemic. The country-singing couple took requests during the stream, and sang tunes such as “Shallow” and “Amazing Grace.”

Their online concert was a huge success, and drew in 5.2 million viewers. With that many people tuning in at once, it’s no wonder why the stream crashed multiple times!

To work around the technical issues, Brooks and Yearwood hosted a second home concert, and it aired as a televised special on CBS. Called Garth and Trisha Live!, the special aired on April 1.

Like they did during their first home concert, Brooks and Yearwood took requests.

Garth Brooks and Trisha Yearwood will host a live concert on CBS after Facebook crash https://t.co/vHVhqfkeZN

After that, Brooks went on to film a concert that aired at drive-in theaters across America on June 27. Of course, that too was a smash success.

On Monday (July 6), Brooks and Yearwood’s teams released a statement saying that “the Garth/Trisha camp has possibly been exposed to the Covid-19 virus.”

As a result, Brooks, Yearwood, and their team members are all quarantining for two weeks. “Out of an abundance of caution,” the pair has made the decision to postpone their July 7 Facebook concert.

Brooks is also postponing his weekly live series “Inside Studio G,” for the next two weeks.

The statement also indicated that Garth and Trisha are “fine,” but they are quarantining “To be smart about this.” You can read their full statement below.

Out of an abundance of caution, Garth Brooks is moving his and Trisha Yearwood's July 7th Facebook concert to a later date and postponing Inside Studio G for 2 weeks. While Garth and Trisha are fine, the Garth/Trisha camp has possibly been exposed to the Covid-19 virus. To be smart about this, they are all quarantining for 2 weeks and thank everyone for their concern.-Team Garth & TeamTY

We’re sorry to hear that Brooks and Yearwood had to postpone their Facebook concert, but their reason for doing so is certainly understandable.

Whenever they come out of quarantine, fans will be treated to an extraordinary show! Just watch their performance of “Girl Crush” from their CBS special to see what we mean.

When your phones start blowing up it’s because Trisha and Garth are covering Girl Crush. 👸🏼🤴🏻