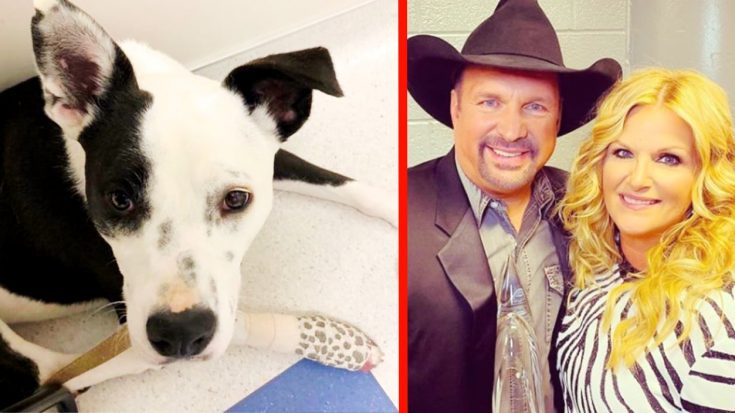 Garth Brooks and Trisha Yearwood‘s rescue dog, Millie, is down one toenail after suffering an accident during a recent walk on the trail.

Trisha wrote about Millie’s accident on Instagram. She shared a photo of the black and white pup with her paw all wrapped up in a pretty pink bandage.

“Millie gave herself a pedicure on the trail today,” Trisha wrote at the start of the post.

She went on to explain that Millie is now “minus a toenail” after the incident on the trail. Despite this, she said Millie “was a rock star at the vet.”

Millie gave herself a pedicure on the trail today. She was a rock star at the vet! She is minus a toenail but please act casual about it so she doesn’t feel self conscious! ? #dogsofinstagram

Speaking about Millie’s missing toenail, Trisha wrote, “…please act casual about it so she doesn’t feel self conscious.”

Poor Millie! We’re sure that had to hurt!

The adorable pooch has been part of Garth and Trisha’s family for the past year. She was just a young puppy when the couple adopted her from Maury County Animal Services in November 2018.

She joined Garth and Trisha’s other furry family member, another pup named Emmy.

Trisha shared a bunch of photos of Millie after her adoption, and encouraged others to rescue pets in need of homes. “You can save a life, have a new best friend and give a homeless pet a forever home at the same time,” she wrote.

Introducing Millie, our new rescue! (Emmy’s still not quite sure what happened ? ?) In the spirit of #GivingTuesday let’s bring awareness to the importance of #petadoption & #animalrescue. Millie was the ONLY dog adopted Saturday from #MauryCountyAnimalServices. You can save a life, have a new best friend and give a homeless pet a forever home at the same time. Who knows, you might even adopt one of Millie’s siblings! xoxo #AdoptDontShop

Millie found her forever home, and a loving one at that! Trisha and Garth will surely take good care of her while she rests her injured toe.

If you’d like to learn more about Garth and Trisha’s first rescue dog, Emmy, be sure to tune in to the video below. It’s a clip from Trisha’s cooking show, Trisha’s Southern Kitchen, and she describes how Emmy came to be a part of their family. It turns out she was on the side of the road when Trisha first met her.

Both Millie and Emmy are lucky to have loving pet parents in Garth and Trisha!