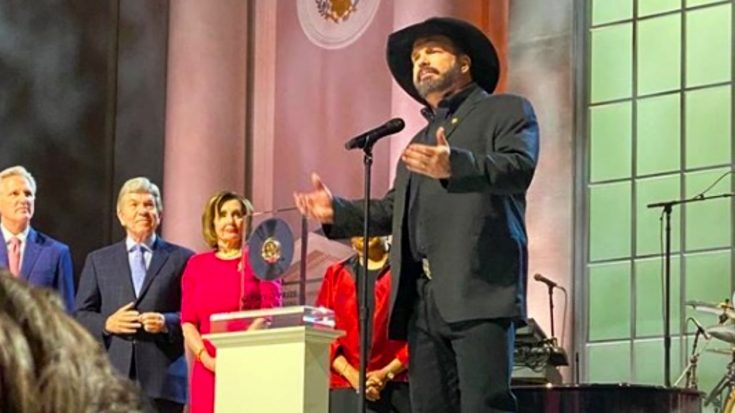 On Wednesday night (March 4), Garth Brooks was honored in Washington D.C.’s Constitution Hall as the youngest-ever recipient of the Gershwin Prize.

The Library of Congress, which bestows the Gershwin Prize, describes it as such:

“The Library of Congress Gershwin Prize for Popular Song celebrates the work of an artist whose career reflects lifetime achievement in promoting song as a vehicle of musical expression and cultural understanding.”

In other words, it’s a great honor.

LIVE from Washington, DC at The Library of Congress! This is a true honor #GershwinPrize. Thank you all for making our music YOUR music!!! love, g #StudioG (To watch, click link in bio or go to Facebook.com/GarthBrooks)

A number of country artists gathered in the nation’s capital to pay tribute to Brooks during the invitation-only ceremony. Chris Stapleton, Keith Urban, and Brooks’ wife, Trisha Yearwood, were among those who delivered musical performances in his honor.

Brooks also took to the stage to perform. Billboard reports he opened the ceremony with “Ain’t Going Down (‘Til the Sun Comes Up)” along with Urban.

Later in the ceremony, Billboard reports Brooks paid tribute to his own musical heroes with a series of covers. He sang Bob Dylan‘s “Make You Feel My Love,” Billy Joel’s “Piano Man,” and Bob Seger’s “Night Moves,” among other songs.

How cool is this, y’all? Excited to see @garthbrooks and my favorite @foodnetwork star @trishayearwood. Thanks for the super fun date, @wintlesque. #gershwinprize #garthbrooks #libraryofcongress

Even though the night was one of celebration, there was still some sadness in the hearts of the Brooks and the other performers.

In the early morning hours of Tuesday (March 3), a strong storm swept through Nashville and middle Tennessee. The storm produced a tornado, which destroyed a number of buildings and resulted in over two dozen known deaths (as of press time).

With the people of Nashville on his mind, Brooks paused during the Gershwin ceremony to pray for the city and the victims.

“I’m going to request, humbly, a moment of silence for those who have fallen and those who are still missing,” Brooks said during the ceremony, according to Billboard.

Prior to the ceremony, Brooks spoke to the publication about the tornado and the impact it had on Music City:

“Representing Nashville is always a joy and an honor, and it takes on an even greater honor tonight because the rest of Nashville who aren’t playing are running chainsaws and opening up their homes to people who don’t have one,” he said. “We are right on that edge of becoming one of the major cities, but in my lifetime we will not lose that small-town community, and that’s a beautiful thing. We are a family.”

Later, Brooks took to Instagram to dedicate his Gershwin Prize to Nashville.

“I accept this #GershwinPrize in honor of the spirit of Nashville,” he wrote. “As one in community and music.”

I accept this #GershwinPrize in honor of the spirit of Nashville. As one in community and music. love, g

There are currently no official videos from the Gershwin ceremony, but the entire thing was filmed for a future televised special. That special will air on March 29 at 9 PM on PBS, so be sure to mark your calendars.

We too, join Brooks in praying for all who have been affected by the tornado. If you’d like to do something to help, see below: