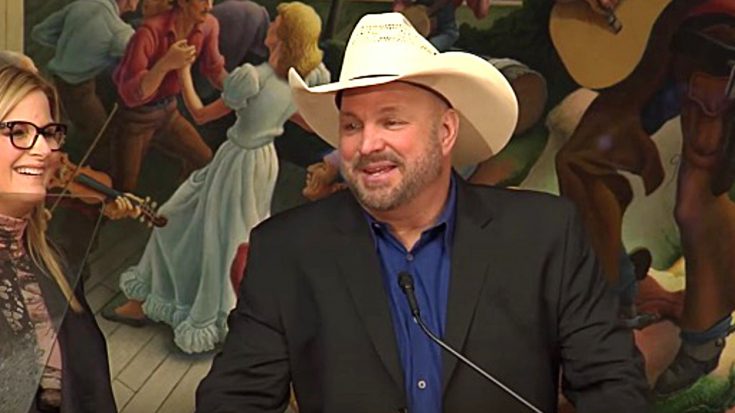 On Tuesday (March 27), Garth Brooks and Trisha Yearwood were granted the honor of announcing the 2018 class of inductees into the Country Music Hall of Fame. One by one, Johnny Gimble, Dottie West, and Ricky Skaggs were revealed as the ones who would join other legendary names such as Hank Williams and Patsy Cline in the Hall.

Brooks is a Hall of Fame member himself, so the gravity of the moment was not lost on him. Prior to introducing the inductees and their familes, he told them all how that day would be one of the best of their entire lives, because it was in his.

Once all of the inductees were named, Brooks took that statement back. Instead, he said getting to announce the other inductees topped being named an inductee himself.

Who Does Garth Want To See In The Hall?

As one of the leading stars in country music, Brooks’ words and thoughts are highly valued in the community. So after the inductee announcement was over, everyone listened when Brooks named who he thought should be in the Hall of Fame next.

One name came out of Brooks’ mouth right away, “Keith Whitley!” he said, naming the “Don’t Close Your Eyes” and “When You Say Nothing At All” singer, who passed away in 1989.

Brooks said he also wants to see one of country music’s most iconic duos in the Hall of Fame. “I don’t think The Judds are in here yet,” he said. He’s right…the mother-daughter duo of Naomi and Wynonna Judd has not yet been inducted into the Hall of Fame.

He May Be Biased On This Pick…

Everyone saw Brooks’ next pick coming from a mile away. Before he named the artist, he admitted that he of course, was a bit biased in saying what he was about to say. “The greatest female vocalist this town has seen is Trisha Yearwood,” he said.

Before the inductee announcement, Brooks said he and Yearwood talked about how cool it would be for her to join him in the Hall of Fame one day. Yearwood is hopeful that day will come, and that she’ll be here to see it.

Garth’s Plea To The Hall

Along that note, Brooks had one final plea to make to the Hall of Fame. You see, the way things are set up now, only three new inductees are brought in each year. This is supposed to maintain prestige and prevent a dump of artists from being inducted at once.

But the rule also keeps people out of the Hall who obviously deserve to be in. As a result, many artists pass away before they get the chance to be inducted:

“There’s a lot of people in this town that should be on these walls,” Brooks said. “So my plea to the Country Music Hall of Fame…is, let’s figure out a way to catch up a little bit, so these people can enjoy this while they’re alive.”

Only time will tell if the Hall will change its protocol for future inductions. In the meantime, we can hope that all of the artists Brooks named will one day make it into the Hall, because they all deserve it!

Skip to the 39-minute mark in the clip below to watch Brooks and Yearwood reveal the 2018 class of Hall of Fame inductees.