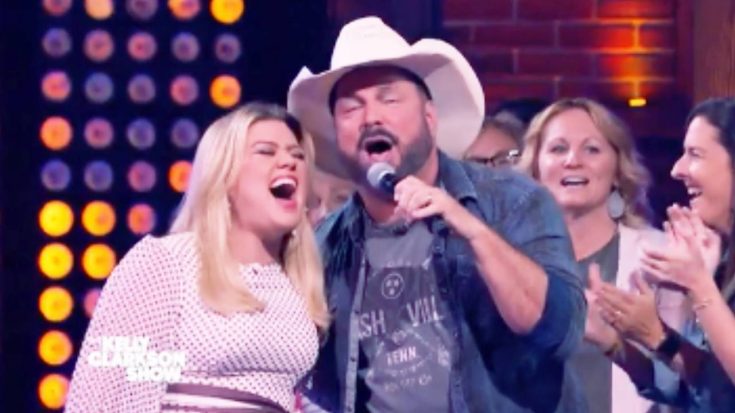 Monday’s (November 25, 2019) episode of The Kelly Clarkson Show is a special one because unlike every other episode, there is only one guest – Garth Brooks!

Usually, Clarkson interviews a few different celebrities at a time, but this entire episode was dedicated to Brooks. They called it the Garth Brooks Hour. Because he was the only guest, they were able to talk about so much more, which made for some incredible moments.

One, in particular, was when Brooks made Clarkson cry with his spur of the moment acoustic rendition of “To Make You Feel My Love.”

Another was during her famous Kellyoke segment, Clarkson performed Brooks’ classic 1993 anthem “Ain’t Goin’ Down (‘Til the Sun Comes Up).”

The “Whole Lotta Woman” singer kicked off the fast-singing tune for her audience and was joined by Brooks, who appeared at the top of the stairs. He met up with Clarkson at the bottom of the stairs where they put the song into high gear with awesome harmonies!

When the song was over, Clarkson bowed down to Brooks, and he just looked like he was having the best time ever. If you’ve been keeping up with Clarkson’s Kellyoke covers, this is one you won’t want to miss. It’s one of her best yet!