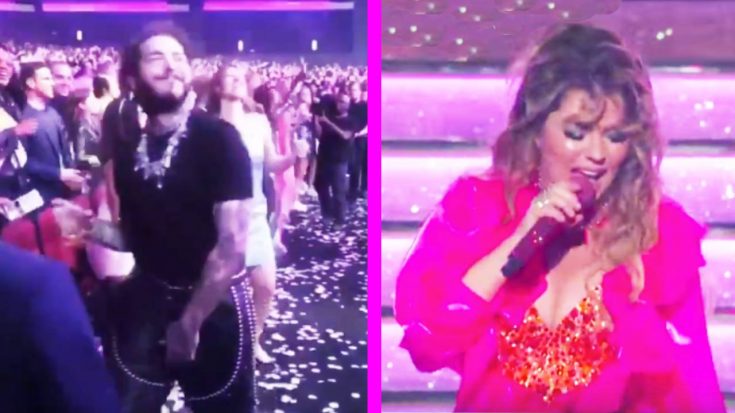 The 2019 American Music Awards held on November 24, 2019 marked a special occasion. It was the first time in 16 years that Shania Twain performed at the awards show.

Twain closed out the show with a medley of her hits, but not before she started the performance with covers of Post Malone’s “Rockstar,” Twenty One Pilots’ “Stressed Out,” Taylor Swift’s “Shake It Off” and Drake’s “God’s Plan.”

She then transitioned into her own hit, “You’re Still The One” before getting the crowd on their feet with “Any Man of Mine” and “That Don’t Impress Me Much.” She closed out the show with “Man! I Feel Like a Woman,” a song that had the crowd dancing and singing along.

Shania Twain just graced us with some of her biggest hits. What a way to end the show! West Coast, it's your turn. Tune in to the #AMAs on ABC!

Someone that pretty much everyone noticed was singing along was rapper Post Malone. Apparently the love is mutual!

Post Malone was spotted dancing around the front row – beer in hand – and singing along during “Man! I Feel Like A Woman.” Watch the video below.

Post Malone jamming to Shania Twain = The best 23 seconds of my life. pic.twitter.com/eNSlao4Kf0