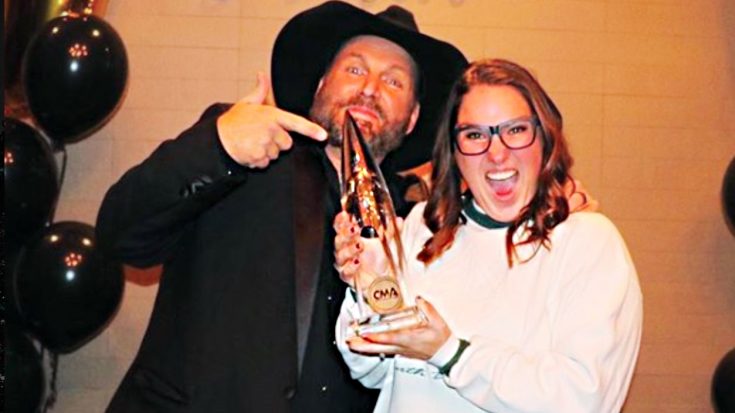 Often, it seems that the children of country music singers often end up following in their parents’ musical footsteps. Willie Nelson, Waylon Jennings, Travis Tritt, Sara Evans, and more all have children who sing and have established their own careers.

Another country superstar who has a singing child is Garth Brooks. Out of his three daughters it’s his youngest, Allie, who was bitten by the musical bug.

As Allie detailed in a recent interview, even though she always knew she wanted to sing, her dad made her put her career on hold for a bit. Before she entered the music business, he made her promise that she would go to college and get a degree first.

Allie kept that promise, and graduated from Belmont University (stepmother Trisha Yearwood‘s alma mater) in May.

Now that Allie is a college graduate, she is free to pursue her music career full-time. Of course, even though Allie kept her promise to him, Garth still can’t help himself from wanting to guide her through the whole process.

During an interview on the Ty, Kelly, & Chuck radio show, Garth detailed the inner struggle he feels over having a daughter in the music industry. While he wants to help her, he also realizes she needs to experience things for herself.

“You so want to get your hands in it because, you’re dad,” he said. “But at the same time you know it isn’t going to be anything to her if she doesn’t do it herself.”

As for how often he gives Allie advice, Garth says that he tries to only help her if she comes to him first. “So you don’t offer too much, you wait for her to ask,” he said.

Luckily for Allie, she will always have a reliable source to lean on any time she needs some help along her musical journey. As one of the most successful country artists in history, who better to get advice from than Garth?

Listen to Garth’s full interview on Ty, Kelly, & Chuck below. You can tell how proud he is of Allie and all she has accomplished!