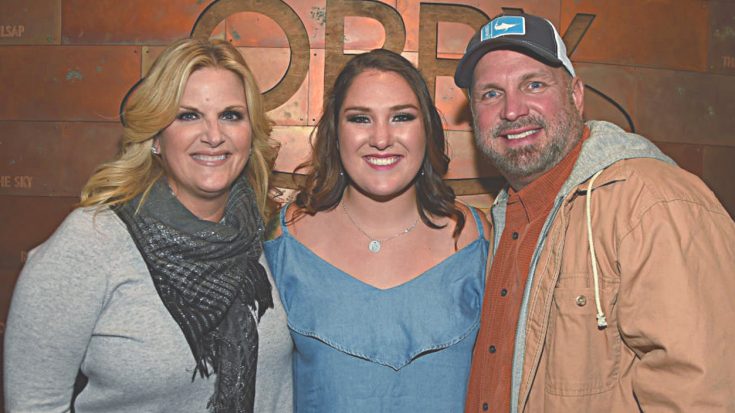 Allie Colleen Tells All About Childhood

In 2001, Garth Brooks was sitting at the top of the country music world. So that’s why it came as a huge shock when that year, he announced his decision to retire from touring and performing.

The reason why Garth chose to retire is simple…he wanted to spend more time with his daughters.

Because of his devotion to his family, Garth’s youngest daughter Allie Colleen tells the Children of Song podcast she and her sisters grew up without any notation of what it was like to have a famous father. “I don’t know what it’s like to have celebrity parents,” she said. “My dad was there every night.”

In that interview, Allie dives even more into what it was really like to be raised by Garth Brooks.

Growing Up As Garth’s Daughter

As Allie explained, Garth wasn’t the only one who put his career on hold in order to raise her and her sisters. Her mother and Garth’s first wife, Sandy Mahl, also devoted herself to the girls’ care, as did her “bonus mom,” Garth’s second wife, Trisha Yearwood.

“My parents were phenomenal in the way that they shut down everything to raise us,” she said. “We came home, we did our homework, we played outside, we got disciplined. We were rowdy kids.”

Even though Garth and Sandy were divorced, the two of them made a point to ensure that their daughters would see them both frequently.  And by frequently, we mean they worked out a system that allowed their daughters to see each of them every day.

How The System Worked

Speaking about the system her parents established, Allie said it was “probably the greatest system anyone ever had.” It’s a system that Garth, Sandy, and Trisha maintained throughout her entire childhood.

“From the age of five or six until I moved out of the house, we switched every day at six o’clock because my parents wanted us to see both parents every day,” she said.

Because of the system that they had in place, Allie’s every day was filled with love and affection from her parents. This is surely a huge part of the reason why she feels she had a “normal” childhood compared to other celebrity children.

Even though Allie grew up with no notation of her father’s fame, she still ended up following in his musical footsteps. She too, is a singer and songwriter, and has been making her mark in the country music scene.

However, she hasn’t been able to pursue her career full-time until right now. That’s because long ago, she made a promise to her father that she would wait.

You see, Garth wanted Allie to finish college before she took off to pursue a career in music. Wanting to please her father, Allie attended Belmont University in Nashville, and majored in songwriting.

She just graduated in early May, and now she’s ready to take on the music world!

Garth certainly raised a talented young woman! You can get a taste of what her singing sounds like by watching the video below.

We loved hearing more about what it was like for Allie growing up with Garth as her dad! How about y’all?