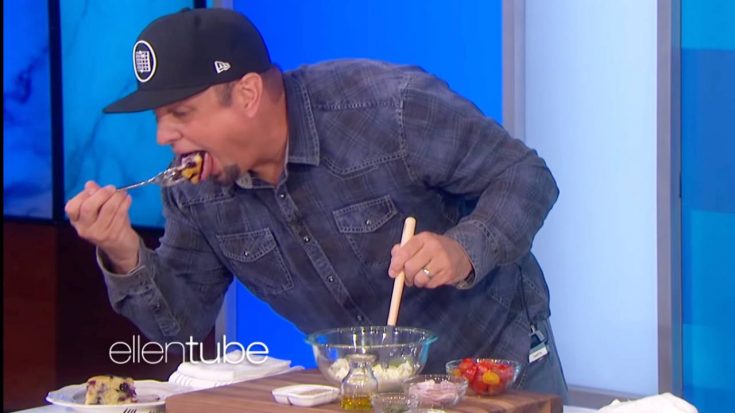 On May 28, country legends Garth Brooks and Trisha Yearwood served as guest co-hosts on The Ellen Show. Brooks hosted the show solo back in December, but brought “the love of his life” with him this time.

“Your cowboy hat?” Yearwood asked him during their monologue.

They kicked off the show answering giving some relationship advice and singing a funny song where “the wife is always right.”

The married couple of 15 years kept the funny going during a cooking segment, where they showed off two recipes from Yearwood’s upcoming cookbook Trisha’s Kitchen: a blueberry pancake cake and tartlets.

Yearwood described the former as “blueberry pancakes on steroids,” which seemed to excite her husband.  He picked up a cooked slice and smelled it, but he was getting ahead of himself because they had to demonstrate how to prepare it first!

Yearwood told Brooks he’d be making the pancake cake as well and he said, “Oh I am? Oh, it’s not going to be good!”

First, they added flour to their mixing bowl. When Brooks did this, a cloud of flour blew into his face and he coughed a little bit, which made the audience chuckle. After recovering from that, he was putting more and more pre-measured ingredients in his bowl.

“This is easy, I’m cooking!” he exclaimed before asking when it would be time to put in the M&M’s. (Which the recipe did not call for!)

Finally, it was time to try the blueberry pancake cake and all he could do was sigh and throw his head back in enjoyment.

Next, they moved down the table a bit to show how to make the tartlets. Apparently one bite of the pancake cake wasn’t enough because Brooks ran back and picked up his plate so he could continue to eat during the segment.

Brooks continued to try to pay attention to the directions his wife was giving him about making the tartlet, but his attention kept going back to the pancake cake! At one point, he was stirring the tartlet ingredients with his left hand and he leaned over to serve himself another bite of the cake with his right hand. And they say men can’t multi-task!

“What are you doing?!” laughed Yearwood.

The tartlet looked delicious, but based on Brooks’ reaction to the blueberry pancake cake, that is definitely a recipe we will have to try once Yearwood’s cookbook comes out this September!

Watch the full segment below, and get ready to laugh!