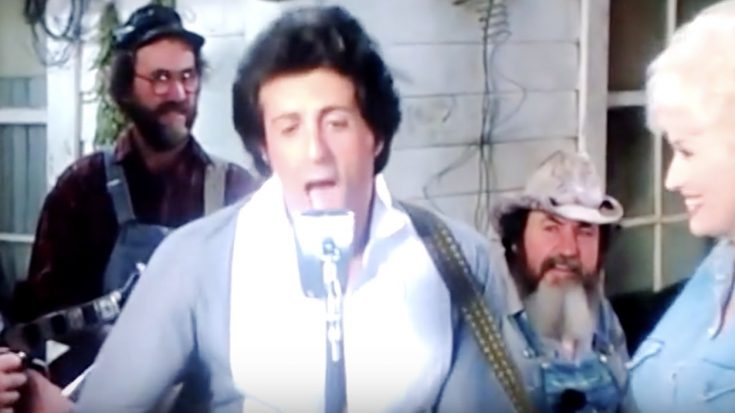 When you hear the name Sylvester Stallone, you immediately think of the Rocky movies, or maybe the Rambo franchise. He’s one of the more iconic action stars of his generation, and is the last person we would associate with country music.

But his tough, New York City persona made him the perfect person to cast in the movie Rhinestone alongside country legend Dolly Parton. He played obnoxious cab driver Nick Martinelli, who Parton’s character Jake Farris is tasked into turning into a country star.

In the film, Jake had a long-term contract singing at a club called The Rhinestone, which is run by a sleazy manager named Freddie. She bet him that she could turn anyone into a country star in two weeks. If she won, she could get out of her contract, but if she lost, she would have to perform there for five more years.

Freddie selected Nick, thinking it would be close to impossible, but Jake took him to Tennessee to teach him how to be country, and they end up falling for each other along the way.

Stallone sang several songs in the movie including “Stay Out Of My Bedroom,” “Woke Up in Love,” “Drinkinstein,” “Sweet Lovin’ Friends,” and “I’ll Be There.”

While “Drinkinstein” is a more comical and over-the-top interpretation of “country” to Stallone’s character, he sings a couple more pure country songs with Parton.

The movie didn’t fare well at the box office, or for Stallone, seeing as he won a Razzie for Worst Actor and Worst Original Song. Despite not so stellar reviews, it is still a fan-favorite for country music fans because it gave Parton two Top 10 singles from the soundtrack, “Tennessee Homesick Blues” and “God Won’t Get You.”

Take a listen to Stallone and Parton’s duets below.

“Stay Out of My Bedroom”

“Woke Up In Love”