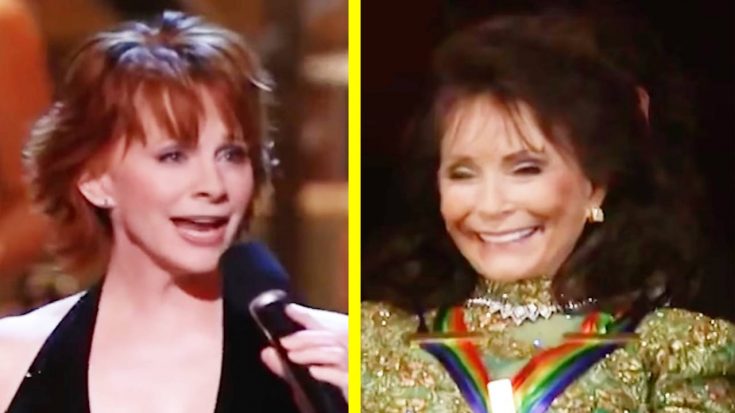 For her entire career, Reba McEntire has looked up to Loretta Lynn. Heck if it wasn’t for Loretta paving the way, there might not be a Reba McEntire in country music.

Loretta and Reba go way back. In 1986, the two country legends did an episode of Hee Haw together.

As the years went by, the two became kindred spirits. When Loretta Lynn passed away the morning of October 4th, Reba wrote a heartfelt tribute on social media.

“Mama and Loretta Lynn were four years apart, Mama being the oldest. They always reminded me a lot of each other. Strong women, who loved their children and were fiercely loyal,” she wrote alongside a photo of her and the Coal Miner’s Daughter. “Now they’re both in Heaven getting to visit and talk about how they were raised, how different country music is now from what it was when they were young. Sure makes me feel good that Mama went first so she could welcome Loretta into the hollers of heaven!”

Reba continued, “I always did and I always will love Loretta. She was always so nice to me. I sure appreciate her paving the rough and rocky road for all us girl singers.”

Seeing Reba’s tribute made us think back at all the times she has paid tribute to Loretta, and one of our favorites has to be the 2003 Kennedy Center Honors. Loretta was honored alongside James Brown, Carol Burnett, Mike Nichols and Itzhak Perlman.

Reba with Garth Brooks, Patty Loveless, Trisha Yearwood, George Bush, Sissy Spacek and Lyle Lovett in 2003 at the Kennedy Center Honors where one of the honorees was Loretta Lynn. #ThrowbackThursday pic.twitter.com/jRKKvCLVfl

Reba took the stage to sing Loretta’s 1971 song “You’re Lookin’ At Country,” and totally commanded the stage from the second she walked out. There was a roaring applause as Reba maneuvered through the lyrics that were autobiographical to not only Loretta, but to herself as well!

Watch the awesome tribute below.