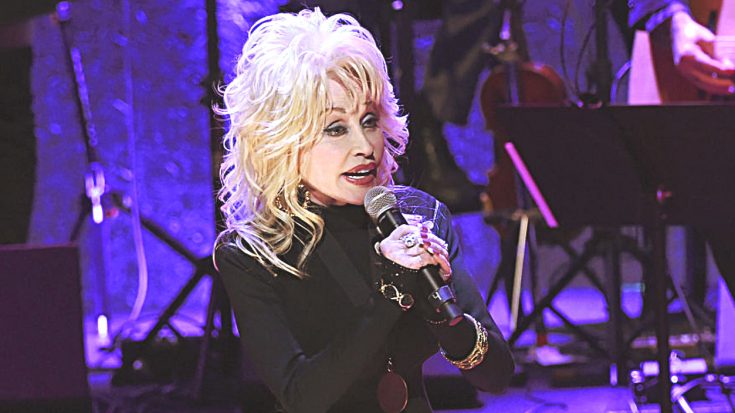 Dolly Parton is one of the most recognizable voices and beloved personalities to ever grace country music. But, not everyone is a fan. In fact…the one person you might think would love her music the most…doesn’t!

During an interview with Good Morning Britain in Feburary 2019, Dolly revealed that Carl Thomas Dean, her husband of over 50 years, isn’t a fan of her music. She quickly defended Dean, however, by saying that he is proud of her but just doesn’t share her taste in music.

“He’s proud of me. And he loves that I love what I do. I think it’s just … it’s a touchy subject. I’m like his little girl I think. He just worries about that,” Dolly said. “He likes hard rock. He likes Led Zeppelin and bluegrass music, and my music is somewhere in between. He doesn’t dislike it, he doesn’t go out of his way to play my records, let’s put it that way.”

When the host suggested that perhaps that is one of the secrets to Parton and Dean’s long lasting marriage, Dolly agreed, saying, “I think that’s true. And the fact that we like each other, we respect each other. We’ve always had a good time. He’s crazy. I’m crazy. We laugh a lot and I think that’s been one of the healthiest, the most precious parts of our relationship.”

Dolly met Carl when she was just 18-years-old. He was 21. As if scripted by a country song, the couple met at a laundromat where Dolly was washing her clothes. Dean confessed that it was love at first sight.

“My first thought was I’m gonna marry that girl,” Dean said on the couple’s 50th wedding anniversary in 2016. “My second thought was, ‘Lord she’s good lookin.’ And that was the day my life began. I wouldn’t trade the last 50 years for nothing on this earth.”

In 1966, the pair wed in a private ceremony with only the preacher, the preacher’s wife and Dolly’s mom in attendance. Donning a dress made by her mother, Dolly said “I do” to Dean and the rest is history.

Dean has remained primarily out of the spotlight during the last 50 years. Dean reportedly told Dolly early on in their marriage that he wanted nothing to do with the lifestyle of being a celebrity. But, Dean has supported her and allowed her to become one of the most iconic female vocalists in country music history. They say that behind every great man is a great woman. We think it’s fair to say that it goes both ways.

Years ago, Dolly wrote a song for Carl Dean called “Marry Me.” Hear Dolly sing it in the video below.