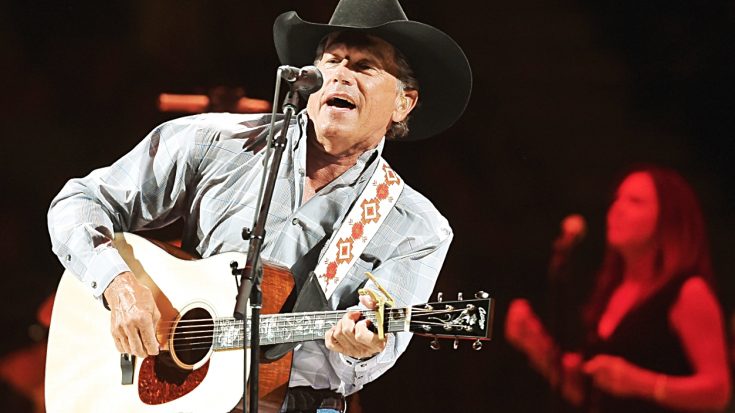 The King of country music and his adorable little grandson are about to hit radio waves with a song that you’ve never heard before!

George Strait has just announced some of the details for his brand-spanking-new album, and along with it – dropped a new single that features his precious grandson George Harvey Strait III. They call him Harvey for short.

This Video Of George Strait & His Grandson Will Have You Smiling From Ear To Ear
George got a kick out of the whole thing, and you surely will too. Like grandpa, like grandson! https://t.co/sUOSMom7JC #countrymusic #georgestrait pic.twitter.com/UZid1MKI9O

At 66 years old, George Strait has cut nearly 30 studio records, scored 50+ chart-topping singles, and has one of the most dedicated fanbases in the history of the genre. This true-blooded Texan seriously takes the cake no matter what he does.

Reported by Rolling Stone, during one of his Strait To Vegas shows on Friday, December 7th, 2018, he played more than one new track off his forthcoming album and even shared the name of it.

Honky Tonk Time Machine will be his first new album in more than three years and if you listen to his singles from the project, you’ll get a taste of what’s to come!

Named after his own favorite brand of tequila, Codigo, the first single is a bouncy and twangy ode to drinking this legendary liquor. The second (and newest) single, however, is one that many have been waiting for…

Nobody knew this song was ready to be released or that it featured his grandson, but you can bet your bottom dollar it has folks talking!

He first performed the new single “God and Country Music” (without Harvey) during one of his December 2018 shows in Las Vegas as part of his Strait To Vegas semi-residency.

The brand new album, titled Honky Tonk Time Machine will not only feature his grandson, but also contains collaborations with Willie Nelson and songs written by Johnny Paycheck, his son Bubba Strait, and Lori McKenna.

“God and Country Music” was penned by McKenna, Luke Laird, and Barry Dean. It is centered around a reflection on country music, noting that it is one of two things “still worth savin’.”

“I’m really excited to have some new music coming out,” Strait said in a press release. “It’s been about two years since I’ve released a record. It was great writing with Bubba and Dean again and creating such a beautiful song with Bubba and Jeff Hyde. Also, it was a very special thing for me to be able to write and sing one with the legend Willie Nelson. I hope everyone enjoys listening to Honky Tonk Time Machine as much as I enjoyed making it.”

Check out the full track list below along with his brand new song featuring young Harvey – and let us know if you’ll be first in line to pick up a copy when it is released!