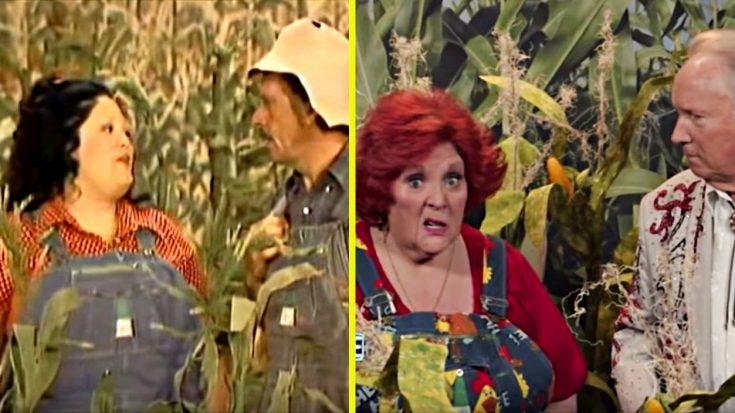 50 years later and the cast of Hee Haw has been brought together for one heck of a reunion! While a few Hee Haw legends are there in spirit, the rest of the crew is keeping their legacy alive. Over the weekend, the Kornfield Friends were invited on the Huckabee Show to celebrate the big anniversary and fans can’t stop reminiscing.

Of course, the cast couldn’t have a reunion without their iconic cornfield sketch. Four members of the cast – who call themselves the Kornfield Friends – brought all their witty jokes and silly expressions to the field yet again! Buck Trent, Misty Rowe, Jana Jae, and Lulu Roman help fans keep the Hee Haw legacy alive one day at a time.

LuLu from the early days of Hee Haw

Lulu Roman had a large part in the “Christian Barber Shop” creation. Roman pushed for more Christian songs to be played on the show and quite a few of the cast members jumped on board. For the barbershop scene, musicians Grandpa Jones, Roy Clark, Archie Campbell, and other Hee Haw cast members came together.

Jane Jae played with Buck Owen‘s band on the show as one expert fiddler. She quickly became noticed by fans everywhere with her trademark blue fiddle. Jae still plays to this day with the same fiddle that Hee Haw gave her when she started on the show in the 70s!

Misty Rowe’s time on the show involved a lot of smiling and clapping as she jokes on the Huckabee Show. Rowe was one of the main characters on the cornfield sketches, becoming the queen of quirky punchlines. She also often appeared as Junior Samples’ assistant in the car comedy segment. Her beauty and perky attitude landed her a big fan base!

Buck Trent spent a good amount of time alongside Roy Clark on Hee Haw as a musician. Trent referred to Clark as “one of the greatest entertainers of all time.” Trent himself has gone on to continue to play music and has been featured on several country hits including Dolly Parton’s “Jolene.”

Following their interview, the Kornfield Friends even put on a live performance! This is one unforgettable 50-year reunion you don’t want to miss. Watch the full video below!

From Their Appearance on the Huckabee Show Tonite, You Can Still Catch It Tomorrow At 8PM/7PM Central on TBN.Here they Revisit the Kornfield, Talk With Huckabee and Take Us To "Rocky Top", the Kornfield Friends !