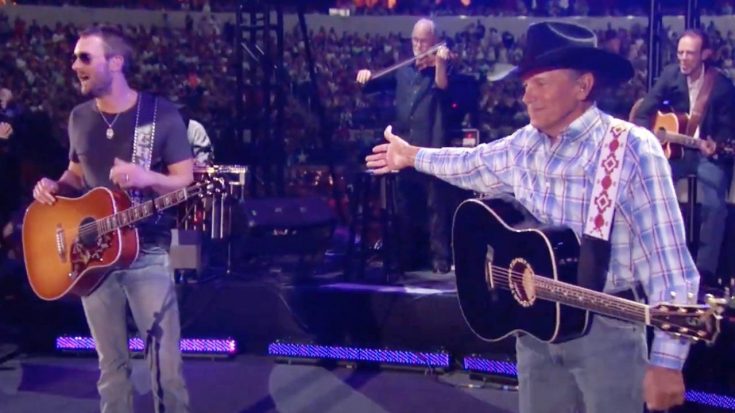 Back in 2014, when George Strait was on his Cowboy Rides Away Tour, he had many different special guests join him for each show including Martina McBride, Miranda Lambert, Jason Aldean, Little Big Town, and Eric Church.

Church was the special guest for his dates in Omaha, Nebraska, Baton Rouge, Louisiana, and at the final show of the tour in Arlington, Texas alongside Aldean, Kenny Chesney, Ronnie Dunn, Gill, Faith Hill, Alan Jackson, Lambert, McBride, Lee Ann Womack, and Asleep at the Wheel. There, he and Strait performed “Cowboys Like Us” together.

Of course, this was not the first time Strait had ever interacted with these singers. In fact, he is good friends with most of them, including Eric Church.

During an interview with Apple Music’s Zane Lowe on his podcast At Home, Church told one story about hanging out with George Strait that is almost unbelievable! He revealed that after the Omaha show, which was the first show he played with Strait, he and his wife were hanging out on Strait’s tour bus with him.

They got to talking about their other musical interests and Church mentioned that he liked James Brown, and Strait said, “I love James Brown!”

Church said, “So George has got his boots off, he’s in gold toe black socks, like dress socks. And I said, ‘Let’s play some James Brown, come on.’ So he puts on some James Brown. And next thing I know, George Strait is tearing down in the middle of the bus, my wife’s tearing down with him, they’re all dancin’!”

He continued, “I’m watching George Strait dance in gold toe socks to James Brown. It’s one of the coolest damn things I’ve ever seen in my life. I’ve never seen anything like that. It is cool as shit. So I’m watching this guy do this, goin’ ‘it doesn’t get better than this. This is the best I’ve seen.’ So, he’s tearing it up, man. George Strait and James Brown. Beat that.“

Oh, how we wish there was video proof of this. We would pay good money to see The King dancing around to James Brown!

Watch Church tell the story below.