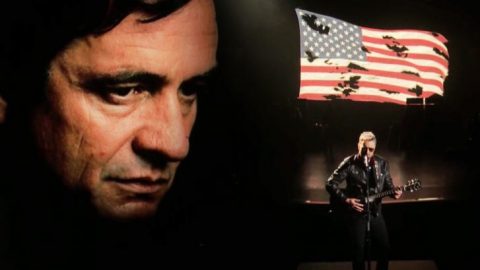 The 55th Annual ACM Awards, which were held on September 16, looked very different this year. The awards show took place at three historic Nashville locations: The Bluebird Cafe, The Ryman Auditorium, and of course, The Grand Ole Opry.

Eric Church was one of the lucky few who got to stand in “The Circle” to perform at the ACM Awards. He sang one of his latest songs, “Stick That In Your Country Song.”

The song touches on real-world issues including soldiers coming back from war, overworked and underpaid school teachers, and more.

Church’s performance began with him strumming on a dark stage, and Johnny Cash reciting “Ragged Old Flag” played on the screen behind him. The “Desperate Man” singer then passionately dove in to his own song with an image of the American flag waving behind him.

RAC Clark, the executive producer for the ACM Awards, spoke with Country Aircheck about Church’s performance, which was completely the singer’s idea.

“As we got into it, we found the Cash estate and publishers are very protective,” Clark said. “No matter how much talking I did trying to get it cleared, it was a corporate wall.”

It was then that Church wrote a letter to the country legend’s children, Rosanne Cash and John Carter Cash.

Clark said, “I’m never going to share that letter, but it’s the reason that performance aired. His passion about what he wanted to say and why allowed them to entrust him with their father’s legacy.”

Watch Church’s ACM performance, which begins with Cash’s “Ragged Old Flag,” which only happened because of the Cash kids’ blessing.

Watch Eric's performance of "Ragged Old Flag" by Johnny Cash and "Stick That In Your Country Song" live from the 55th ACM – Academy of Country Music Awards. #ACMawards