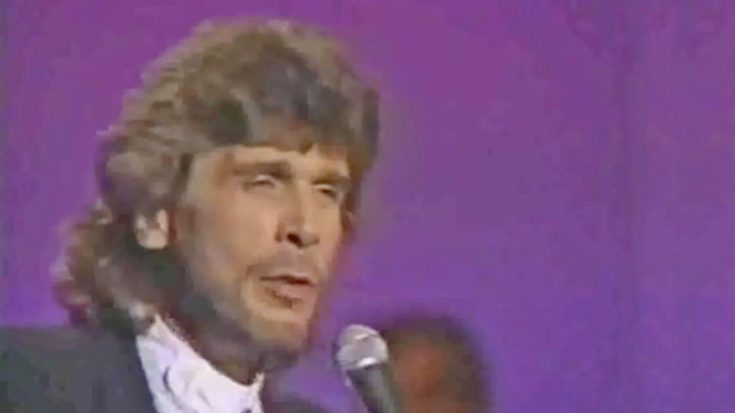 Before he was recording hits such as “I Love a Rainy Night” and “Drivin’ My Life Away,” Eddie Rabbitt was a successful songwriter, penning Ronnie Milsap’s “Pure Love” and Elvis Presley’s “Kentucky Rain,” just to name a couple.

Rabbitt began releasing his own music in 1977 and even won the ACM Award for Top New Male Vocalist. Throughout his years of performing, he included “Kentucky Rain,” which he wrote with Dick Heard, in some of his live shows up until his death in 1998. One of those performances was caught on tape and we’re so glad it was.

While introducing the song, Rabbitt said, “Another song that I’m real proud of was a song recorded by a guy who’s not around anymore, but I’m sure we all remember Elvis. This song made my mommy and dad real proud. They finally thought that maybe something gonna become of me and it became his 50th Gold Record, and it goes like this.”

While performing a medley of his hits, he kicked it off with “Kentucky Rain,” which is about a man walking, driving, and hitchhiking through the rain in Kentucky searching for his missing lover

“Kentucky Rain” was a big hit for Presley in 1970, although it wasn’t included on an album until his compilation album Worldwide 50 Gold Award Hits Vol. 1.

It was also included in the 2000 re-release of the album From Elvis in Memphis even though it didn’t appear on the original 1969 album, and like Rabbitt said introducing the song, it was Presley’s 50th Gold Record.

Watch Rabbitt perform it below.