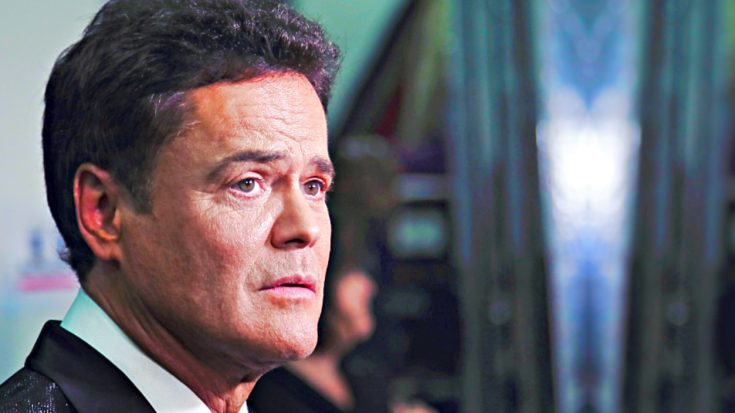 While most musical artists set out to forge their own path in the industry – there’s something truly special about singing with someone. It is even more magical when a family gets together and uses all their talents to create music. That is the case of the Osmonds.

This ? was taken as we arrived at London airport '72. Were any of u there that day? 35 days until I return for the UK tour! #FBF #TheOsmonds pic.twitter.com/EGi190fTHS

The Osmonds were originally made up of older brothers Alan, Wayne, Merril, and Jay – latter adding the two younger brothers, Donny and Jimmy. As the two youngest and the last to join the group – the bond between the two brothers was incredibly strong.

As the siblings grew up – they each grew into their own roles and places in the music industry. While Donny began singing and even took up residence with their sister, Marie in Las Vegas – Jimmy found his own path in the theater.

His most recent role was as Captain Hook in a U.K. production of Peter Pan. He was excited for the role and a perfect fit with his charisma and captivating acting abilities.

Oh yes it is! Panto stars talk ahead of shows across West Midlands @ShropshireStar https://t.co/Nu1p6Tfs0c pic.twitter.com/I5twyqRC9A

But in a scary moment, all the glitz and glamor of the stage seemed to fade away as he fell ill while performing and needed to be rushed to the hospital.

The Daily Mail reported that a representative for Osmond said, “On the evening of Thursday, December 27 after pushing through the evening’s performance of ‘Peter Pan’ at Birmingham Hippodrome, Jimmy Osmond was driven straight to the hospital and diagnosed with a stroke. He is grateful for all the well wishes and will be taking time out in the new year.”

Jimmy reportedly finished the play and even signed autographs on his way out of the theater before getting to the hospital. It just proves what kind of man he is and how special his fans truly are to him.

As word spread throughout social media, his big sister, Marie reached out and asked fans for prayers in this time of need.

Prayers for my brother Jimmy ?? https://t.co/XfjGHDMEf7

It took brother Donny some time to process what had happened and reach out to social media. His heartfelt message read, “Thank you all for your thoughts and prayers on behalf of my little brother, Jimmy. I love you, brother.”

Thank you all for your thoughts and prayers on behalf of my little brother, Jimmy. I love you, brother. pic.twitter.com/hXozXy6SuG

Prior to his stroke, Jimmy Osmond had the crowds on their feet with his exhilarating performance as Captain Hook. You can watch some behind-the-scenes footage from the play in the video below and please keep Jimmy and the Osmond family in your prayers during this time.