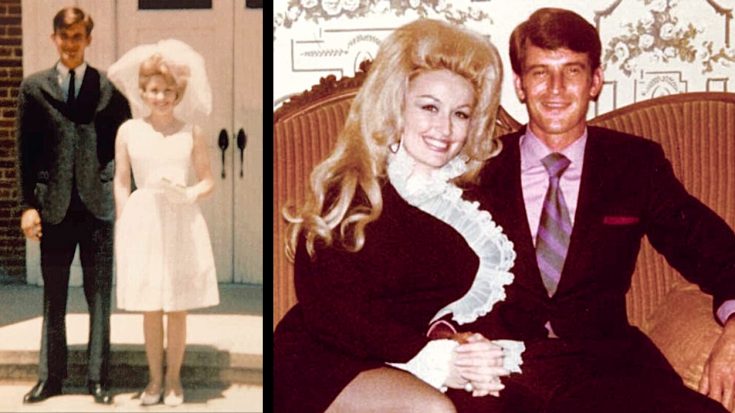 Carl Dean, Dolly Parton’s husband of 53 years, was photographed during a rare public outing in December and fans have mixed feelings about it.

Photos of the 77-year-old were captured while he was out and about near his home in Brentwood, Tennessee. Dean has been notoriously reclusive during his marriage to Dolly, and has been photographed few times since their 1966 wedding.

Carl and Dolly met outside of a Nashville laundromat in 1964 when she was 18 and he was 21. They wed two years later when Dolly’s music career was just taking off. Rather than have an elaborate wedding, the couple kept it simple and eloped because her record label was worried that marriage would interfere with her music career.

Dolly, donning a white dress made by her mother, said “I do” to Dean in front of only her mother, the preacher, and his wife.

“My mother made me a little white dress and a little bouquet,” Parton told CMT. “But I said, ‘I can’t get married in a courthouse because I’ll never feel married.’ So we found a little Baptist church in town, and went up to Pastor Don Duvall and said, ‘Would you marry us?’ We got pictures on the steps right outside the church.”

Dolly and Carl renewed their wedding vows in June 2016, on their 50th anniversary. The event gave Dolly the wedding she had always wanted. “Fifty years is a long time for anything, and I felt that we needed to do something to commemorate this. It’s been a good 50 years and I don’t know how many more years we’ll have left,” the “Jolene” singer said.

During the course of their decades-long marriage, Dean has been content to let Dolly have the spotlight while he keeps a low profile. But, Dolly did share that she and her husband like to go out to eat and go grocery shopping together, but usually in the middle of the night.

“We go to places Publix or Walmart or places for certain things I want to get, and we’d go in the middle of the night to those places that are open 24 hours a day,” she said during to the press while celebrating the release of her Netflix series Dolly Parton’s Heartstrings. “You’d be surprised at how lucky I’d get with that. You see a few people, and I don’t mind. I love people. I just don’t want to slow up my shopping.”

So, the recent photos of Dean took Dolly’s fans by surprise. While some were thrilled to catch a glimpse of Carl Dean, others took issue with his privacy being invaded.

Check out the pictures HERE and let us know what you think.