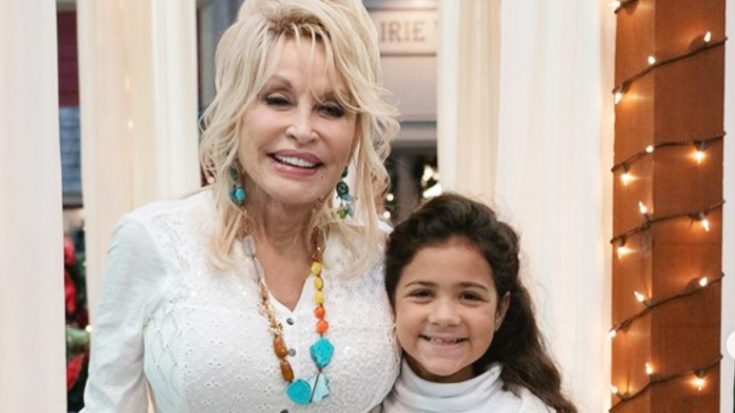 Dolly Parton plays an angel in her new Netflix movie, Christmas On The Square, but Dolly might have a pair of wings in real life, too.

9-year-old Talia Hill nearly suffered an accident on the set of Dolly’s new Netflix special. Talia and her two brothers were all cast in the movie after several auditions in Atlanta. Now, the talented Hill family has opened up about Talia’s near-death experience.

Talia explained that she was standing at the hot chocolate station on set when the cast was ordered to return to their assigned marks. Unfortunately, Talia did not notice an oncoming vehicle, and she walked directly into the car’s path. In an interview with Inside Edition, Talia recalled:

“So, there is a vehicle moving, and I was walking. And then somebody grabbed me and pulled me back. And I looked up, and it was Dolly Parton.”

Much to Talia’s surprise, Dolly appeared like a guardian angel and pulled the little girl out of the vehicle’s path. Thanks to Dolly (And maybe a little Christmas magic), Talia was completely unharmed.

“And she’s like, ‘Well, I am an angel, you know,'” Talia described her interaction with the country superstar. “Cause she plays an angel in the movie. And I was in shock. She hugged me and shook me and said, ‘I saved your life!'”

Check out the full interview with the Hill family in the video below!