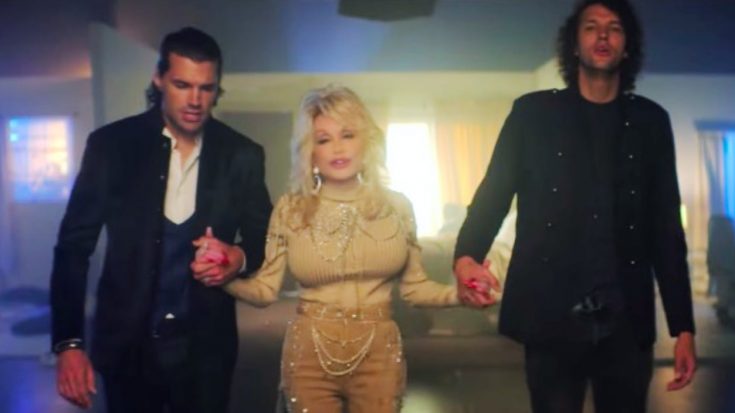 Dolly Parton has never shied from sharing her faith through song. So that’s why it made perfect sense for her to unite with one of the leading bands in the Christian music scene for a special collaboration.

For KING & COUNTRY is a Christian pop band consisting of brothers Joel and Luke Smallbone. The two brothers grew up in Australia, but the band is now based in Nashville.

One of the group’s most popular songs is titled “God Only Knows.” The track was released in January 2019 as the second single off of their third studio album, Burn the Ships.

“God Only Knows” became a huge hit, and claimed the top spot on both the US Christian Airplay chart and the Christian Adult Contemporary chart.

Even a year after it was released, the song was one leading tracks on Christian radio. So for KING & COUNTRY decided to release a remix, and they enlisted Parton to help.

The Tennessean got the exclusive preview of the trio’s collaborative music video, which was released in full at 11 PM CT on August 29, 2019.

When asked by The Tennessean why she decided to unite with for KING & COUNTRY for this collaboration, Parton explained it was because “God Only Knows” touched her deeply when she heard it.

“It was like God spoke,” she said. “I thought so many people with all their problems…I just felt like this song touched everything people struggle with. There’s just such a peace and love and sweetness about it, and I really think this song says what we need to be hearing right now.”

Our friends.. this perhaps is the most thrilling New Music release we’ve ever had. It is with great enthusiasm that we give you the final version of ‘God Only Knows’.. feat. the legendary @dollyparton.

The Smallbone brothers came up with the concept for their collaborative music video with Parton. All three of them play themselves while simultaneously playing “distressed” versions of themselves. Joel portrays an addict, Luke plays someone who is gravely ill, and Parton chose to play a prostitute.

“I just wanted to show how far people could go down, and I knew that was something I could do,” Parton said about taking on the role.

The music video is as emotional as it gets, so prepare to shed a tear or two when you watch it below.

“God Only Knows” was already a beautiful song, and Parton’s addition adds a whole new sense of beauty to it. She and for KING & COUNTRY went on to win a Grammy for their collaboration, that’s how good it is.