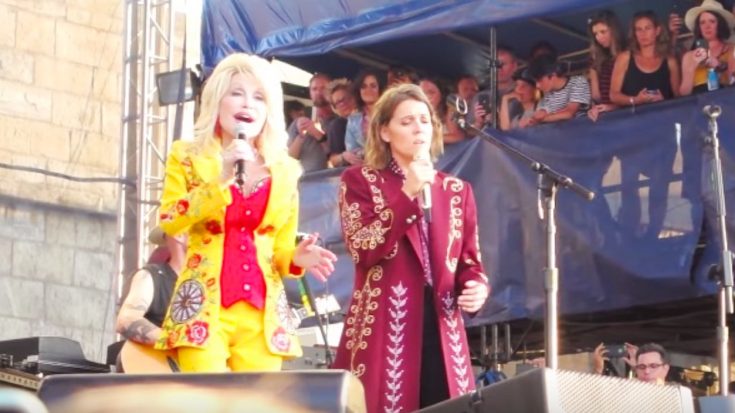 Dolly Parton pulled off one of the most epic concert surprises we have ever seen!

In 2019, festival goers at the Newport Folk Festival in Rhode Island gathered to watch the final set of the day. The set carried a mysterious title, only being described as “♀♀♀♀: The Collaboration.”

The only thing fans knew was that the set was being curated by Brandi Carlile, a three-time Grammy winner and the co-producer of Tanya Tucker‘s album While I’m Livin’.

Carlile took it upon herself to gather an impressive lineup of female performers to join her for the set, including Sheryl Crow, Linda Perry, Jade Bird, and Lucy Dacus. She was also joined on stage by her Highwomen bandmates: Maren Morris, Amanda Shires, and Natalie Hemby.

But the biggest surprise of all came when Parton walked out on stage, leaving both the audience and other performers in shock.

I just love surprises! You should have seen the look on your faces ? Thanks for having me @brandicarlile ? #NewportFolkFestival
?: @listenyoungman pic.twitter.com/H4pPtrbKO5

Parton perfectly captured the audience’s surprise in a tweet, writing “You should have seen the look on your faces.”

We’re sure those looks of surprise turned to looks of awe as Parton joined the many talented women on stage to sing a selection of some of her biggest hits. Those hits included songs such as “Jolene,” “9 to 5,” and “Eagle When She Flies.”

Of course, no Parton performance would be complete without “I Will Always Love You.” The classic song is beloved by all generations, thanks to Parton’s own version as well as Whitney Houston’s successful 1992 remake.

Instead of singing the song solo, Parton enlisted Carlile’s help to perform it as a duet. It’s a duet that no one ever knew they needed, but now that they’ve witnessed it, they’d never give it back!

Videos of Parton’s surprise collaboration with Carlile spread like wildfire online, including the one we have to share with you below. It perfectly captures the beauty of their duet, making it the next best thing to watching it live.

This is one performance that those festivalgoers are sure to treasure for years to come. It was truly something special.