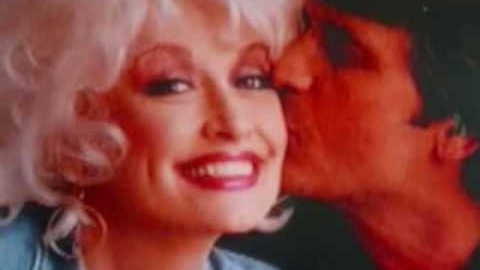 Dolly Parton married young and has been married to the love of her life, Carl Dean, for 55 years. But, that doesn’t mean she doesn’t have some stories to tell from her single days.

In a recent interview with W Magazine, the “Jolene” singer shared the not-so-steamy details of her first kiss. It happened in grade school at a friend’s party, according to Dolly.

“We played Spin the Bottle and I got my first kiss from a boy there, a different boy than my first crush,” Dolly recalled. “But, I was happy it landed on one of the cute boys. I had a lot of boys in my life. I love boys. I still do,” Dolly said with a laugh.

She went on to divulge that Johnny Cash was her first “grown-up crush” and recalled attending the Grand Ole Opry with her uncle and seeing the Man in Black perform live.

“When I first saw [Johnny Cash], before I actually got to sing…when Johnny Cash came out, he was young and he was skinny, and he just had that magnetism — the way he moved around — so sexy,” Dolly remembered. “I always thought he was so sexy and so good looking in the early days.”

Despite her close professional relationships over the course of her career, Dolly has achieved a long, successful marriage. Carl Dean, whom the singer met outside their local laundromat in 1964, has quietly supported Dolly, allowing her to pursue her dreams while he managed a successful business of his own. In fact, Dean has rarely seen his wife perform live.

“He gets nervous seeing me perform. It’s almost like seeing your kid in a recital. He’s afraid I’ll mess up,” Dolly told Ellen DeGeneres in 2012. “Actually, he has seen me a time or two and it did relax him a little. He saw that I do mess up and it’s OK because people are not gonna punish me for it.”

Watch Dolly Parton’s full interview and hear her talk about her first kiss, crushes, tattoos and more below.