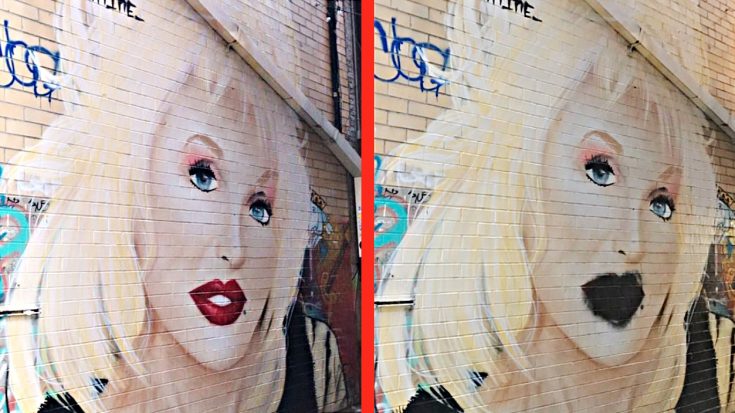 A vandalized mural of Dolly Parton recently received the attention of the community after discovering that the color of Dolly’s lips had changed from her signature red lips to black graffiti sprayed carelessly all over her mouth.

A local news anchor acknowledged the difference in the mural on Tuesday (April 14) after visiting the original back in January. She posted on Twitter about her suspensions of vandalism to the mural asking, “Did Dolly switch up her lipstick color or someone else?”

Did Dolly switch up her lipstick color or someone else? Before/After pic.twitter.com/nhpktlsQ0k

You can find the Dolly Parton mural in Knoxville’s downtown Market Square, in an alley known as Strong Alley or Artist Alley.

The vandalized Dolly Parton mural was not the only one affected. The incident also impacted four other murals within the alley.

Dogwood Arts is planning to restore all the vandalized murals and is taking this opportunity to enhance the art with some additional designs.

A local artist, Megan Lingerfelt, is being brought in to collaborate with Valentine to restore and enhance the pieces.

Funding is being provided by Dogwood Arts and the restoration will begin promptly. Visitors will see the new designs and enhancements progressing over the next few weeks. The artists are considering adding new lips, earrings, and maybe a butterfly or two to the iconic Dolly Parton mural and a layer of anti-graffiti coating.

Watch the news video about the incident below.