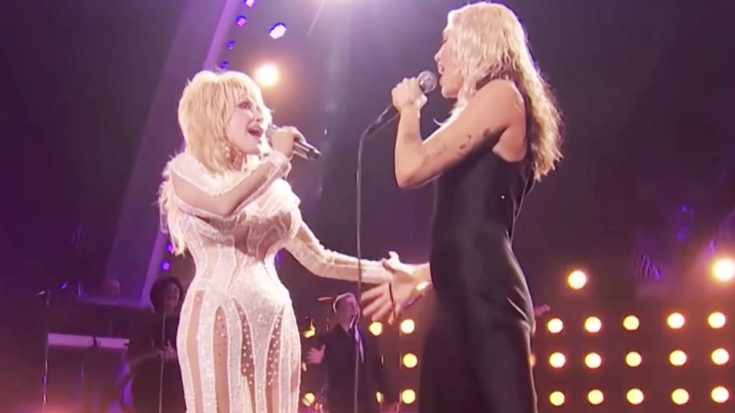 On November 21st, Miley Cyrus announced that she would be having a new co-host for her New Year’s Eve Party on NBC…her “fairy” godmother, Dolly Parton!

Leading up to the big night, Miley shared some rehearsal photos to get everyone excited for the show.

Not only did Miley and Dolly host the show together, they also performed several duets! The New Year’s Eve party also included performances from Fletcher, Sia, Latto Rae Sremmund, Lily, and a surprise performance from Paris Hilton.

The dynamic duo performed a classic country medley, which included Patsy Cline’s “Walkin’ After Midnight.”  After they finished that song, Miley said, “Aunt Dolly, I flew you all the way form Nashville to Miami and we didn’t even do ‘Jolene!'”

Watch them perform “Walkin’ After Midnight” and “Jolene” below.

But, the most talked about performance of the night was when they took the stage to perform a mashup of Miley’s 2013 song “Wrecking Ball” and “I Will Always Love You.”

Dolly transitioned seamlessly into “I Will Always Love You,” and the crowd went wild. As they closed out the song, the camera cut to couples dancing and kissing to the romantic lyrics.

Watch the epic performance below.