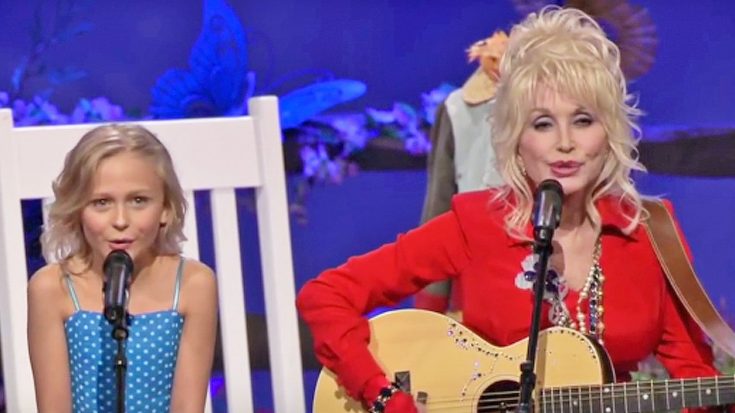 Are we seeing double?! Dolly Parton and her mini-me, Alyvia Alyn Lind, who played her as a nine-year-old in the Coat of Many Colors movies, were being interviewed by Home & Family about the 2015 made-for-TV movie.

Coat of Many Colors – Full Trailer

Full trailer for Dolly Parton's "Coat of Many Colors"

The hosts asked Parton about a song in the film called “Angel Hill.” Parton revealed that she had actually written the tune a while ago, but finally got around to recording it when the movie was being made. Lind lent her vocals to the track as well.

Parton gave a backstory about the song, which was written following the death of her baby brother.

“A big portion of the movie was based on us losing one of my little brothers. There were so many of us, we were being born right after another, so Mama would always tell one of the older ones, ‘Well, this baby’s gonna be yours,’ because that meant we’d have to take extra time, get up and rock it or whatever. The baby Mama was carrying was gonna be my baby and when I was her age, I was nine, so, we lost that baby and I was so brokenhearted.”

Check out this behind the scenes pic of little Dolly! @AlyviaAlynLind looks ready to go! 🙂 #CoatOfManyColors pic.twitter.com/G8AP2OWcF1

Lind and Parton climbed on stools and began to sing the heartbreaking song about her love for her baby brother. She calls the place where he is buried “Angel Hill” and makes us tear up when she sings, “I’ll meet you in heaven if it be God’s will/My angel, my angel I’ll meet you in heaven, I can’t wait until.”

Lind sings with the country legend for the chorus and Parton take the lead during the verses. The song, while heartbreaking, is a beautiful tribute to Parton’s brother and turned into a really sweet duet between the “two Dollys.”

The movie did so well, they filmed a sequel the very next year called Christmas of Many Colors: Circle of Love.

Watch the sweet, yet emotional video below.