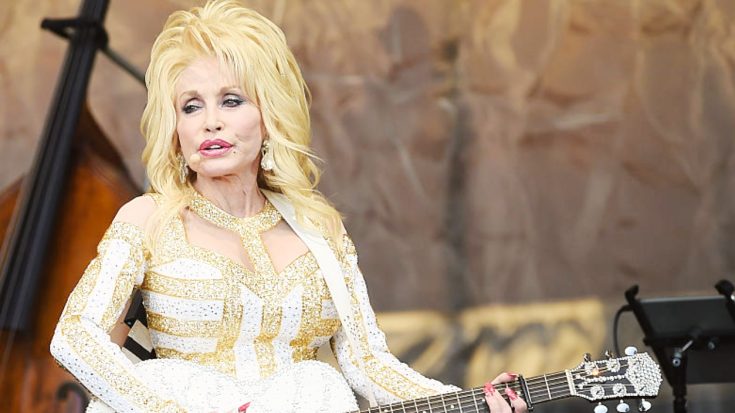 Over the course of her life, Dolly Parton has filled up her resume with a number of titles. She’s a singer, songwriter, actress, businesswoman, author, and more.

Recently, Parton got the chance to combine her love for music and movies when she was invited to create the soundtrack for a new film titled Dumplin’. The movie stars Jennifer Aniston in the part of a former beauty queen who is now a mother to a plus-sized teenage daughter.

Wanting to protest beauty pageants’ expectations for what a young woman should look like, the daughter enters a pageant in protest. Through the process, she turns to Parton’s music as a source of encouragement.

Sneaking Past Fans In A Theater

Because of the teen daughter’s love of Parton’s music, those who watch Dumplin’ will also get the chance to hear plenty of songs from the country music queen. The soundtrack features six new tunes from Parton, which fans will hear for the first time in the film.

Wanting to get a feel for the movie that her music would play such a huge role in, Parton spent time with Aniston throughout production. So now that the movie is finally finished and ready to be screened, it only made sense for them to team up to watch it together.

During a recent interview with InStyle, Aniston spoke about how she and Parton managed to sneak into a screening of Dumplin’ to watch the film. Even though the theater was packed with fans, Parton and Aniston creeped into the back of the theater unnoticed.

However, part of the way through the film Parton realized that she could potentially blow their cover. As Aniston explained, Parton freaked out a bit after she started laughing at one of the funny moments in the movie.

“During one of the funnier parts, she’s stifling her laugh and whispers to me, ‘They can’t hear my laugh. They’ll know my laugh,” Aniston said.

While Parton worked to keep her laughs under control, she was unable to contain her tears as the film got more emotional. Aniston said she caught Parton in the middle of crying, and what she had to say was heart-melting.

“A couple of minutes later I look over and she’s crying,” Aniston said, “and she says, ‘But they don’t know my tears.’”

From the sounds of it, Dumplin’ is going to be one emotional movie. If it can make Parton cry, it’s sure to make you tear up as well.

While you wait to see the film and hear all of Parton’s new songs, enjoy listening to the famous song she wrote for the first movie she ever acted in, 9 to 5. Her talent is endless!