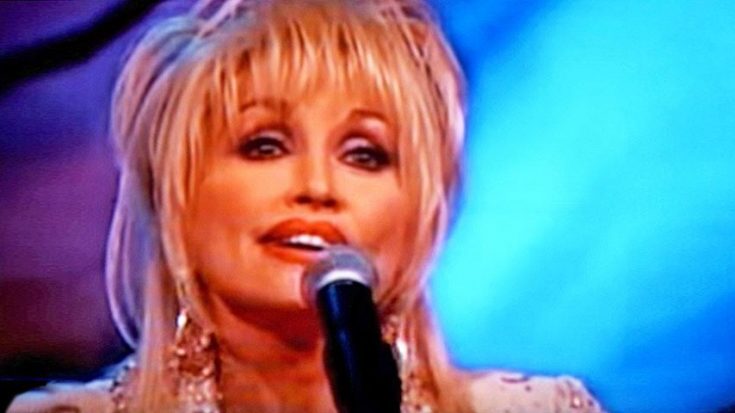 If there’s such a thing as a doubly-classic classic, this cover of “Stairway to Heaven” by country great Dolly Parton, has to be it. How else would you describe a recording by the most honored country female singer doing her version of the most popular rock song of all time?

Dolly Added Her Own Lyrics

Dolly, who never fails to please, recorded this classic rock anthem and made it her own, with the complete approval of the song’s composers, Robert Plant and Jimmy Page, allowed the unlikely Led Zeppelin singer to add some new lyrics of her own.

She Always Loved This Song

This infamous cover appeared on Dolly’s bluegrass collection, “Halos and Horns” in 2002.  There were 14 songs on the CD; Dolly wrote all but two.  Those two were “If” from David Gates’ ’70’s band, Bread, and “Stairway to Heaven.”  Why those two choices? Because they are two songs Dolly’s always loved.  Reason enough.

“My group is called the Blueniques, which kind of like bluegrass, unique bluegrass. So I flavored “Stairway To Heaven” up a bit with the bluegrass flavors like we did Collective Soul’s “Shine” last year and won a Grammy for it,” Dolly shared with CNN Entertainment in a 2002 interview.

“Toward the end [of the song] I added a choir. I always thought of this particular song as more of a gospel song, like somebody trying to buy their way into heaven. And I threw in a few little ad-libbed lines to make it more like it was. We used our bluegrass instruments and the choir to make that big part where Jimmy Page usually played. So we kind of made it bigger in all our ways.”

Fans On Both Sides Approve

We've just played Stairway To Heaven by Dolly Parton Why not RT and tune in https://t.co/lIrB219TPP #radio #barnet pic.twitter.com/REv4eIwJh2

While fans on both ends of the music spectrum were wondering how this crossover would turn out, they need wonder no more. Just like everything else Dolly sings, it was unforgettable and received rave reviews from both sides.

Now, if we could only get Robert Plant and Led Zeppelin to do a cover of “Jolene…”

What’s your opinion of Dolly’s performance?  What crossover would you love to hear?