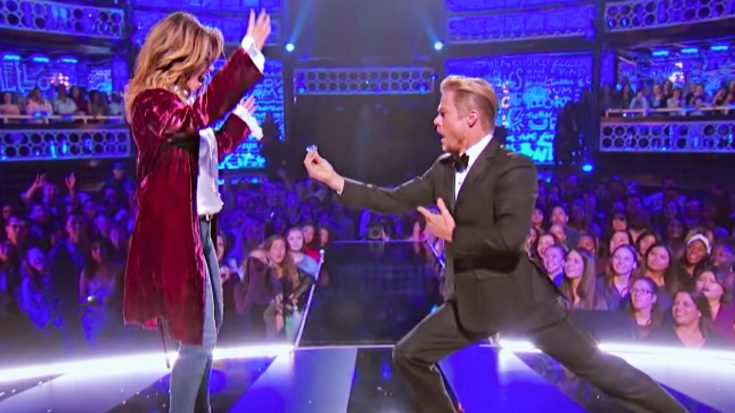 In the sea of competition shows on television, one is unlike any other. Called Lip Sync Battle, the popular series pits celebrities against each other as they lip sync to famous songs.

Sometimes the pairings seem entirely random, but other times the celebrities competing actually know each other. In the case of the show’s first season, two competitors were brother and sister!

As singers, dancers, and overall well-rounded entertainers, Julianne and Derek Hough crushed their battles, making it a challenge for viewers to pick their favorite performer. Because of this, the Hough siblings’ battle is still known as one of the best in the show’s entire history.

Since Derek was such a popular competitor on the show, it only made sense to bring him back for the current season. This time, he was paired against singer Nicole Scherzinger, who was his celebrity partner during Season 10 of Dancing with the Stars.

Derek Gets Romantic With Shania Twain

When it came time for their Lip Sync Battle, Derek and Nicole pulled out all the stops. The special themed episode was in honor of Shania Twain, who happened to be in attendance.

After Nicole performed the feisty “Man! I Feel Like a Woman,” Derek took to the stage in a full tuxedo and started to serenade Shaina with her romantic song, “From This Moment On.”

Before anyone had time to process what was happening, Derek had walked Shania out to center stage, where he quickly dropped to one knee and pulled out a giant diamond!

The audience was in shock as Shania said “yes” to his proposal and the couple dashed to the back of the stage for their wedding. Later on, you see them enjoying their life together as a married couple, and they even welcome a few kids along the way!

Of course, the whole thing was just part of the performance, but it was still romantic to watch.

If that’s still not enough romance for you, be sure to check out Twain’s official music video for the song below. It’s pretty iconic!