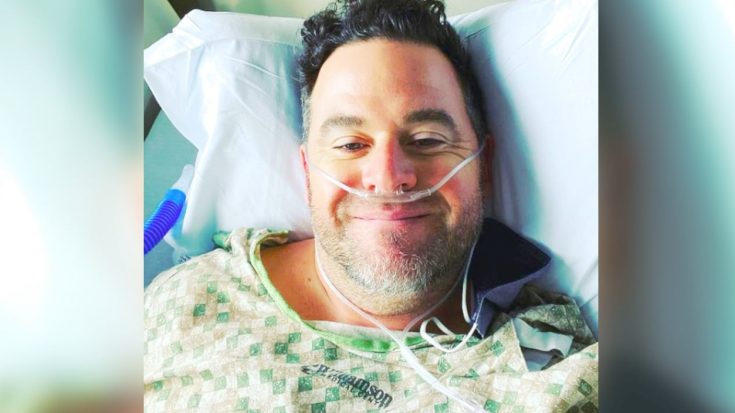 This week has been an eventful one for “Whatever She’s Got” singer David Nail…and not in a good way.

In a post on Instagram, Nail relayed how he woke up on Tuesday (March 30) “feeling 100% normal.” But by noon, Nail says “it was hard for me to walk from my car, to the front door of our house.”

Whatever was wrong, he told his wife, Catherine, that he was feeling better around dinner time. However, he started feeling unusual again later that night.

“By 7:30pm, I could barely walk to use the bathroom, and even laying down was extremely painful,” Nail says.

He only slept a few hours that night. By early morning on Wednesday (March 31), he knew he had to go to the hospital.

“At 6:30am Wednesday morning, after maybe 2-3 hours of sleep, I woke up Cat, and said I’ve got to go to the ER, and drove myself,” Nail recalled.

Nail said everyone’s first thoughts were that something was wrong with his appendix. He said, “there were some other possibilities tossed around,” but in the end, it was indeed his appendix that turned out to be the source of the issue.

“The doctor finally came in and confirmed it was in fact my appendix, and an hr [sic] later I was in surgery,” he said.

Nail spoke about how much he appreciates the doctors, nurses, and other staff members at the hospital who took care of him. While he was hopeful he’d get to go home after his surgery, he was told he’d have to spend the night at the hospital:

“Though I held out hope for going home late tonight, due to the condition my appendix was in, I was told I needed to spend the night,” Nail said. “As upset as I was about the entire ordeal, I’ve felt nothing, but at ease with the staff here at our local hospital.”

Nail said he is looking forward to seeing Catherine and their three kids when he gets to go home on Thursday (April 1). He closed his post by writing, “Love y’all,” and signing his initials.

Read Nail’s full post about his appendix issues and subsequent hospital stay below. We’ll be praying for his quick and complete recovery.