Daughter Catches Parents Singing “Islands In The Stream” In Bedroom 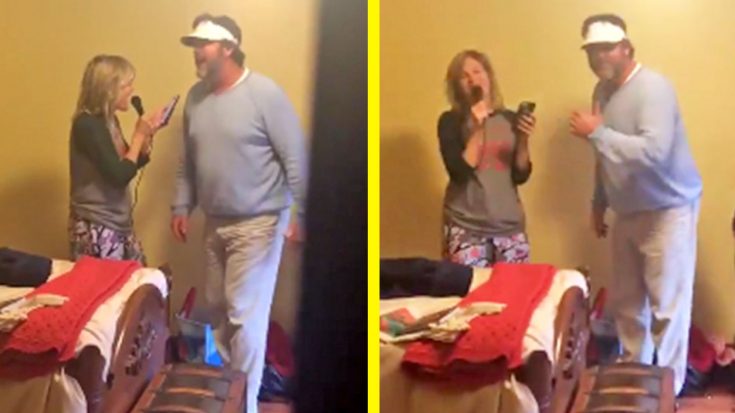 Dolly Parton and Kenny Rogers have become one of country’s most famous duos, setting high standards for duets for more than 30 years. Their tight-knit friendship has brought us some unforgettable songs including “Real Love” and “You Can’t Make Old Friends.” But their most famous duet of all, “Islands In The Stream,” has couples everywhere attempting to recreate the country legends’ talent.

The 1983 duet, “Islands In The Stream” took the world by storm. After its release, the tune went flying across the charts, later selling over two million copies in that same year. Being named by CMT as one of the best country duets of all time, it’s no wonder fans everywhere are still taking on the song to this day.

One sneaky daughter caught her parents in full Dolly and Kenny mode. Emiline Payne, a member of the UAH women’s basketball team, was home for the holidays when she got a front row seat to her parents’ “concert.” One member of the Payne family brought a karaoke machine for Christmas and the result is hysterical.

Emiline peered into her parents’ bedroom where she heard them singing the famous, “Islands In The Stream.” Making sure they didn’t see her, she began to record what might be our new favorite duet. With her mom on the mic, she took on Dolly’s part. As Emiline zooms in, you can see her mom very clearly reading the lyrics to ensure a perfect solo.

As Emiline moves the camera over, you get a glimpse of her dad dancing in the vanity mirror. With a visor on, he is patiently waiting for his time to shine. Finally, her parents come together for the chorus of the song. Her dad busts out some fancy dance moves while his wife bops her hip to the beat. At one point, Emiline’s dad catches her recording and points at her with a big smile.

Emiline later uploaded the video to Twitter with the sweetest caption,

“So my parents brought a karaoke machine to family Christmas and I caught them having their own concert in their room. I love their love.”

Watch the video below to see the Payne parents incredible duet of “Islands In The Stream.”

So my parents brought a karaoke machine to family Christmas and I caught them having their own concert in their room. I love their love. pic.twitter.com/y4hXJ3YURY