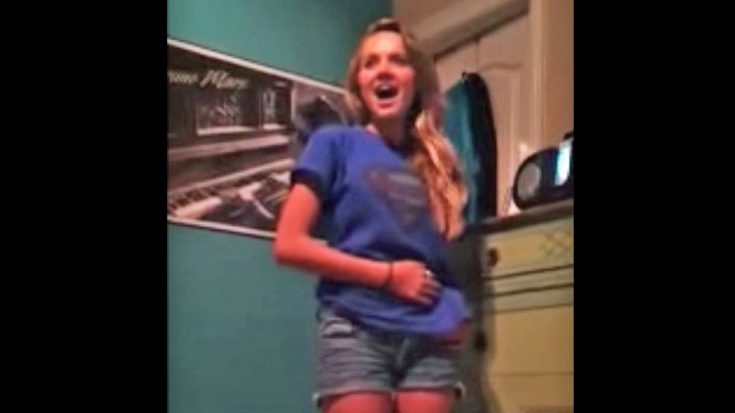 A Star From The Start

During her time on The Voice, Danielle Bradbery was the contestant with the most iTunes downloads for her season. Needless to say, she was basically a surefire pick to win the whole thing.

When she was only 16 years old, Bradbery was named as the show’s fourth winner on June 17, 2013. It was a dream come true for the girl who had been singing country covers at home a year prior.

On June 15, 2012, just a year and two days before she won The Voice, Bradbery shared a video of herself singing that has since generated thousands of views. The definition of simplicity, the video was filmed while Bradbery was singing along to Martina McBride‘s emotional hit, “A Broken Wing.”

No Easy Song To Sing

If you’ve heard “A Broken Wing” before, you know it’s challenging to sing.

It’s a song filled with soaring high notes and requires a lot of emotional power. That’s why the song was such a good fit for McBride, because she was capable of tackling all of its challenges.

With all of that considered, this video proves that Bradbery was destined for stardom. While she was merely standing in her bedroom, Bradbery belted out “A Broken Wing” with effortless ease.

Bradbery’s voice sounds so pure in this video, it’s sure to give you chills from start to finish. Make sure you watch the whole clip, because you have to hear her hit and hold that final note. Talk about jaw-dropping!

Watching this, it’s really no surprise why Bradbery won The Voice and went on to become a country star!