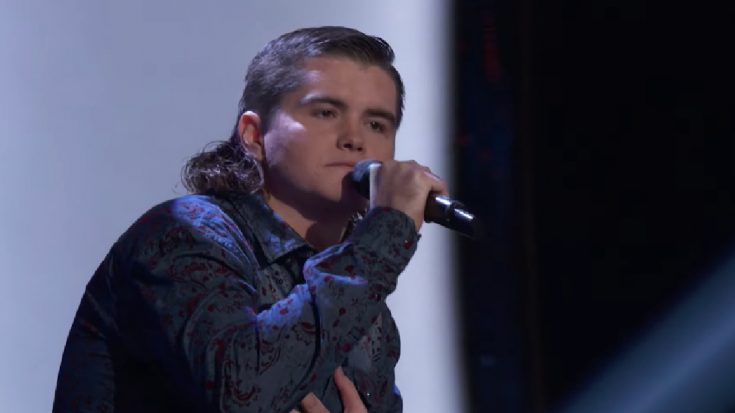 The Voice is back for its 20th season and Monday night’s season premiere did not disappoint. We didn’t have to wait long to see the season’s first four-chair turn and block as country singer Kenzie Wheeler took the stage.

The 22-year-old from Florida crushed his cover of Keith Whitley’s 1988 hit song “Don’t Close Your Eyes” during his Blind Audition. The performance earned Wheeler a four-chair turn from Kelly Clarkson, John Legend, Nick Jonas and Blake Shelton. But, Clarkson used her block on Blake Shelton in hopes of landing Wheeler on her team.

It turned out to be a great move on Kelly Clarkson’s part as Wheeler admitted to being a huge fan of Blake. Blake wasn’t only impressed with Wheeler’s voice, but also with his mullet.

“This guy has a triple threat mullet. First he has the party in the back, he’s got the shaved side, but then the rare widow’s peak. The rarest of all mullets. This guy is a unicorn!” Blake said.

Nick Jonas and John Legend fought hard for Wheeler, with Legend actually begging the singer, “Please give me a shot.” But, Kelly Clarkson kept reminding the singer that she used her one and only block in hopes of adding him to her team.

“I have won The Voice with two country singers. Just saying. I used my only block,” Clarkson told Wheeler.

The argument paid off as Kenzie Wheeler ultimately chose to join Team Kelly. Watch Kenzie Wheeler’s full Blind Audition in the video below.