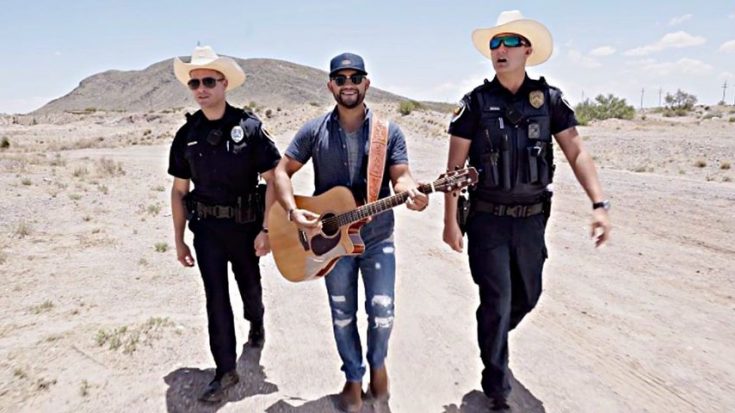 The Lip Sync Battle among law enforcement agencies continues to rage. Each entertaining entry has reached the coveted “viral” status almost the moment it’s shared. But when the Las Cruces Police Department stepped up to the challenge, they had a secret weapon that’s a total game changer…

The New Mexico officers were concerned about being a late entry, but the rapid response proved viewers aren’t concerned about timing – they’re just hungry for more uniformed entertainment.

The video opens with the department’s chief, Chief Gallagher getting different ideas for the video from his police officers. From 70s new wave to 80s hair bands, to 90s rock – his people run the full gamut on personal tastes and style. Still, their ideas just didn’t feel right…

After Chief Gallagher gets approached with numerous pitches for the lip sync video, all considered too outlandish, one employee proposes the winning idea. “What about Frank Ray?” she inquires.

“Frank Ray?” responds the Chief, “Didn’t he hang up the uniform to become a country singer?”
“Technically, he’s still ours till the end of the month,” came the reply.

As it turns out, Frank Ray served on the LCPD for ten years but he recently decided to yield his shield and begin a career as a professional country singer. Ray has released several country covers including a Memorial Day tribute to our men and women in uniform. You have to think Haggard himself would’ve been pleased.

So when it came to deciding who could help them out, LCPD knew Frank Ray was their only choice. As for the song? That was a give in too.

Country star Toby Keith recorded the original video for his hit song, “Should’ve Been A Cowboy” in Las Cruces 25 years ago.

Combining so many sentimental elements made for one heck of a lip sync battle. So get ready to raise your eyebrows and sing along with the squad as they remind us that we all “Should’ve Been A Cowboy.”