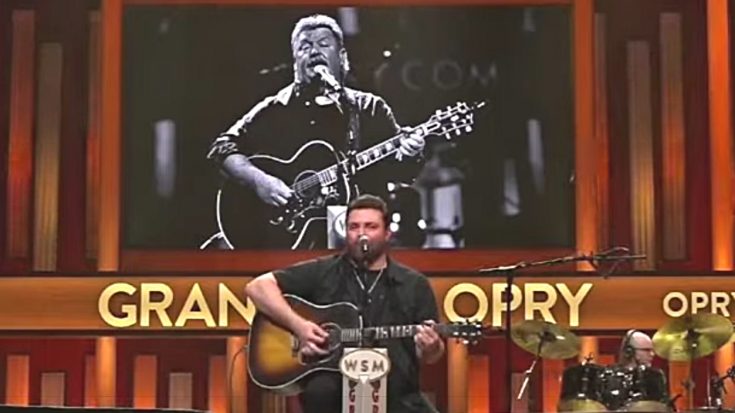 Chris Young paid tribute to the legendary Joe Diffie at the Opry on May 30, 2020, performing his iconic song “Pickup Man.”

Chris Young, along with Chris Janson and Brett Young, performed live at the Opry for the weekly Opry livestream called Circle Sessions.

Due to global events, the trio performed to an empty venue without an audience.  It was the eleventh straight week that Opry Live was filmed without an audience and streamed live so fans could watch performances from the safety of their homes.

Young admitted it felt good to be back on the Opry stage and that he “HAD to play” a Joe Diffie song the first time back.

Felt good to be on that stage again! HAD to play a @JoeDiffieOnline song first time back https://t.co/QMJc7i5ACt

Diffie was a staple of ’90s country music. From 1990 to 2004 Diffie charted 35 singles on the Billboard Hot Country Songs chart and had five number one songs: “Home,” “If the Devil Danced (In Empty Pockets),” “Third Rock from the Sun,” “Bigger Than The Beatles,” and his longest-lasting number-one song “Pickup Man.”

After Young learned of Diffie’s tragic passing, he posted a video on social media of himself singing a snippet of Diffie’s song “Ships That Don’t Come In.” Young captioned the video, “Nothing left to do but sing… this one hurts #ripjoediffie.”

Nothing left to do but sing… this one hurts #ripjoediffie

Young has performed many tributes to Diffie since his passing.

One of them being a virtual performance from his home, for the Our Country event that aired in place of the 55th ACM Awards on April 5, 2020.

Honored to honor @officialjoediffie TONIGHT on The @acmawards Presents: #OurCountry Pre-Show. Tune in at 7/6C on the ACM Facebook Page! Then make sure to watch CBS at 8/7C tonight to see ACM Presents: Our Country!

When he took the Opry stage on Saturday (May 30), Young felt it was important to honor the late Joe Diffie by performing one of his most memorable songs, “Pickup Man.”

“Pickup Man” was released in 1994 as the second single from Joe Diffie’s fourth studio album Third Rock from the Sun. “Pickup Man” was Diffie’s longest-standing number one hit spending four weeks at the top of the Billboards Hot Country Singles & Tracks in December 1994 through January 1995.

Watch Chris Young honor Joe Diffie (at about the 33-minute mark) with the incredible Opry performance below.