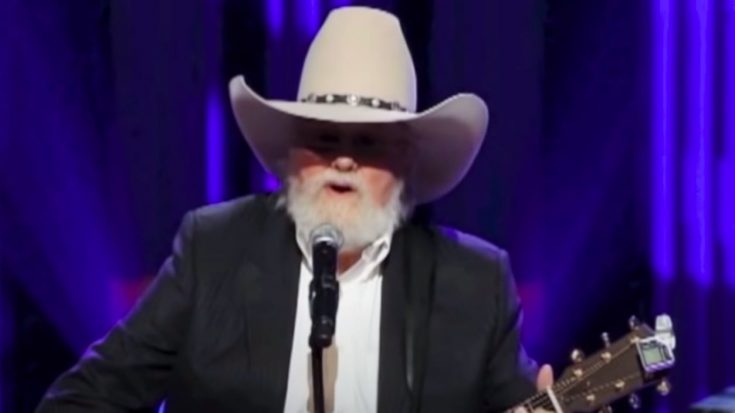 After George Jones passed away in 2013, his fellow country artists gathered at the Grand Ole Opry to pay tribute to him during a memorial service.

One country star who contributed to the service was Charlie Daniels. He spoke at length about Jones, saying how “he sang for us all.”

Daniels said that even though many people have tried to be like Jones, no one has ever performed country music the same way he did. He was a one-of-a-kind artist, and Daniels respected him for that.

“…as long as there’s a country music, he will be remembered,” Daniels ended his speech.

From there, Daniels moved in to a musical tribute. He sang the hymn “Softly and Tenderly,” which Jones recorded. His rendition of the hymn appears on his 2003 album The Gospel Collection.

Daniels sang softly while he gently strummed along on his acoustic guitar. While the performance was certainly more understated than many people were used to seeing from the country icon, it was still powerful.

That power rested in Daniels’ emotional delivery. Although he never broke down during the performance, you can hear the emotion in his voice and read it on his face.

Over seven years later, the video of Daniels singing “Softly and Tenderly” has over 3.5 million views on his YouTube channel.

Now that Daniels has left this world as well, watching him sing “Softly and Tenderly” tugs at the heart in a whole new way. Please remember him and Jones by viewing his performance below.

Both Jones and Daniels were extraordinary artists who are so dearly missed.