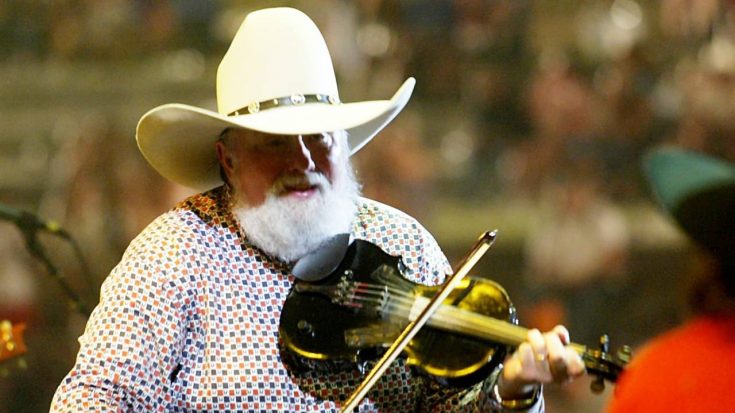 According to a press release, Charlie passed away this morning following "a hemorrhagic stroke." He will be missed.

Daniels was very outspoken in his beliefs and often wrote about them on social media and his blog, which he called “Soap Box.” He kept the blog up to date on his website. Since his passing, Daniels’ son, Charlie Daniels Jr., has taken over the blog and re-titled it “Soap Box Jr.”

In Daniels Jr.’s most recent post on August 28, 2020 titled “The Rest of the Story,” he revealed something about his father that many did not know – he was battling arthritis in his later years.

The legend’s son wrote, “One thing about his fiddle playing that most people didn’t know, it started getting more difficult for him to perform because of arthritis..”

He continued, “Don’t get me wrong, he could shred a fiddle bow better than anyone, but it got harder to hold the fiddle in place for him. He already didn’t hold it ‘correctly,’ at least as far as proper fiddle players and violinists do, but stiffness in his hands and fingers started requiring modifications to his fiddles because he was having to adjust his grip even more to compensate.“

Although Charlie Daniels was known throughout his career as a fiddle player, Daniels Jr. notes that for the majority of his live shows, his father played guitar. He even learned how to play fiddle after he learned to play the guitar and the mandolin.

Posted by The Charlie Daniels Band on Wednesday, August 12, 2020

Daniels Jr. wrote, “The fiddle set and encores would most likely make up less than 1/4 of the show.”

Daniels’ road crew did everything they could to help him play the fiddle without pain, which included putting foam under the fiddle so he could hold it better and trying out different chin rests. They were even looking into 3D printing a brace to “hold onto the back of his shoulder giving him a little more freedom to hold the fiddles the way he needed to, but sadly he passed before we could get any prototypes for him to try out.”

Daniels Jr. ended the post by saying, “I bet his fiddle playing is better than ever.”

Watch Daniels perform at one of his last shows in the video below.