Charley Pride Talks Performing At 2020 CMA Awards: “I Enjoyed It” 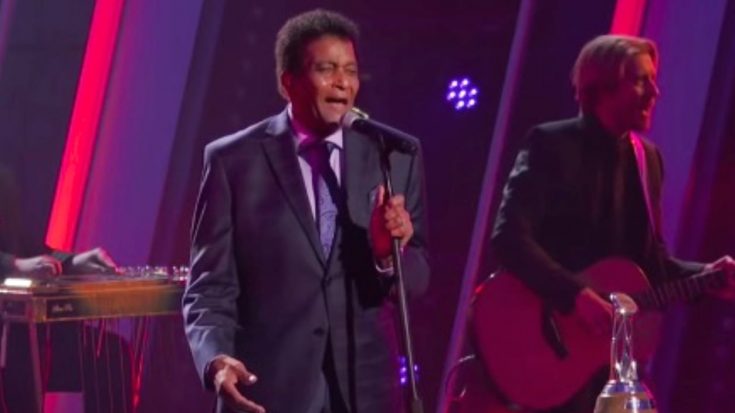 During the 2020 CMA Awards on November 11, Charley Pride was honored with the Willie Nelson Lifetime Achievement Award.

“The Willie Nelson Lifetime Achievement Award is for an iconic artist who has attained the highest degree of recognition in country music,” states a press release about Pride receiving the award. “The Award was established to recognize an artist who has achieved both national and international prominence and stature through concert performances, humanitarian efforts, philanthropy, record sales, and public representation at the highest level. The artist receiving this Award has positively impacted and contributed to the growth of the genre throughout a course of years that have proven to have an unprecedented historical impact on fans and industry alike.”

In addition to being honored with the award, Pride was present to perform during the CMA’s awards ceremony. First, Jimmie Allen performed his song “Best Shot” before speaking about how Pride paved the path for him to be able to experience his own success in country music.

Then, he welcomed Pride to the stage, and together they sang Pride’s iconic #1 song, “Kiss An Angel Good Mornin’.”

Last night was so special. I got to sing with my hero Charley Pride and Present him with The
“Willie Nelson Lifetime Achievement Award”. So thankful for him and his courage to break so many barriers. ♠️✊? thank you @cma for making that historic moment happen for Mr Pride. pic.twitter.com/CYib0Z1On5

As much as fans loved watching Pride on the CMA Awards, he loved singing during them. Speaking to PopCulture.com and other media outlets after the ceremony, he said, “I wouldn’t say I was nervous, but I enjoyed it. It’s not like on stage I’m just as comfortable as I can be, but I enjoyed it.”

The 86-year-old Country Music Hall of Famer also expressed how much joy he got out of being able to see his fellow artists again. “But mostly too, I enjoyed being around some singers I’ve been around and some of my peers for so long,” he said. “It was wonderful.”

Pride also spoke about what it means to him to be the recipient of the Willie Nelson Lifetime Achievement Award:

“I get asked a lot of times what award I like the best,” he said. “I mean, I’ve got so many, it’s like asking me what song do I like the best when I’m singing. And this is the truth. What song do I love the most is the one I’m singing at the moment. So that’s it. I’m going to put this with all the other awards and everything and be happy about having them. And I hope I can get some more, if that’s possible, but I didn’t come into this business to try to win awards, but I’ll sure take them.”

Pride is more than deserving of every award that has ever come his way. See him celebrate being named the 2020 recipient of the Willie Nelson Lifetime Achievement Award by watching his performance at the CMA Awards below.

Congratulations to Pride on this grand accomplishment!