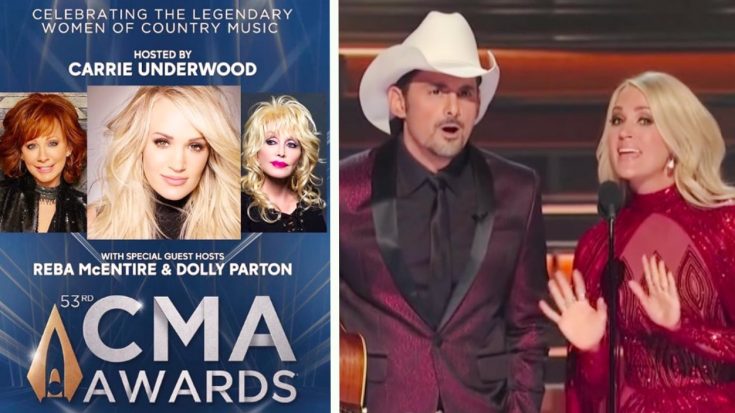 In mid-August, it was revealed that for the first time since 2008, Carrie Underwood will be hosting the CMA Awards without Brad Paisley.

The two superstar singers entertained audiences for over a decade with their skits and parody songs. Paisley even helped announce the gender of both of Underwood’s sons during past ceremonies!

IT'S A BOY! Hosts @carrieunderwood and @BradPaisley open up the 2018 @CountryMusic awards with a baby gender reveal! Congrats Carrie! #CMAawards #BradBlewIt #GaryBlewIt pic.twitter.com/zJ2EWSA98c

But Paisley will not join Underwood to host “country music’s biggest night” this year. Instead, she will have two guest co-hosts, Reba McEntire and Dolly Parton.

The move to place McEntire and Parton in co-hosting roles appears to coordinate with the CMA’s theme for its 2019 ceremony. It was announced that this year’s awards show would be all about female artists, and that some of the genre’s most iconic figures would be honored throughout the night.

While devoted viewers were sad to see Paisley replaced in the hosting lineup, many were excited to hear that McEntire and Parton will share hosting duties with Underwood.

Underwood is also excited about her new co-hosts. While she’s sure to miss hosting the show with Paisley, she is looking forward to celebrating country music’s female artists with McEntire and Parton by her side.

“And of course, my special guest hosts are Reba McEntire and Dolly Parton,” Underwood said in a press release issued by UMG. “It does not get bigger than that or better than that. I feel like the three of us love what we do so much, and we love country music and it means something I feel like, to have us up there on that stage kind of driving the bus for the evening and setting the tone.”

Let’s go girls! I’m so excited to be joining @carrieunderwood and @reba to celebrate the legendary women of country music as a guest host of this year’s #CMAawards on November 13 💖 pic.twitter.com/XzR3Ah65vT

In closing, Underwood said that she’s already anticipating the night she’ll get to host the CMA Awards with McEntire and Parton. “So, I think it’s gonna be a wonderful night and couldn’t be more excited to stand up there with Reba and Dolly,” she said.

Since this year’s CMA Awards will place the focus on female artists, there is the chance that McEntire and Parton’s co-hosting duties will only last for this one ceremony. If that’s the case, maybe we can expect to see Paisley return to host the awards with Underwood next year!

You can relive some of Underwood and Paisley’s best moments as CMA Awards hosts by tuning in to the video below.